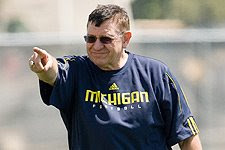 Michigan’s official site has a piece on the coaches’ exercise habits. I think many fans are largely unaware of how much time major college coaches spend working per day. Barwis states that they often work 16- or 17-hour days, and I’ve read about many a coach who regularly sleeps on the couch in his office. These guys barely get enough time to sleep, let alone exercise . . .

. . . which is why it’s important for superfans to have this handy dandy guide to where the coaches work out.

Defensive line coach Bruce Tall says, “I have a nice route that goes from State to Eisenhower and I loop back around and end up on Packard.”

Linebackers coach Jay Hopson has a different route. “I can’t stand running,” says Hopson, “but I have to keep the heart going. I’ll do a 5K that takes me around campus and back through The Diag, which is a beautiful part of the run and something I look forward to. I don’t listen to music. I just take off and start running.”

Sadly, Rich Rodriguez and some of the other coaches do the majority of their exercising at Schembechler Hall, which makes it increasingly difficult and potentially unlawful to stalk them.

However, if you’re going to stalk them, put on your sprintin’ shoes or get out the Schwinn. When I lived in Ann Arbor a few years ago, Lloyd Carr walked out of the Starbucks at State and Liberty. My excuse is that I was only wearing flip-flops (that’s right, ladies – only flip-flops), but that dude left me in his dust like I was Minnesota and he was Carlos Brown.