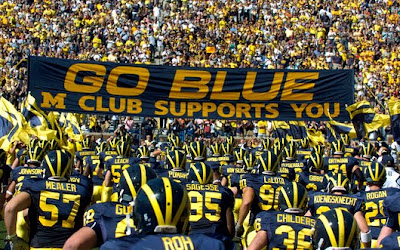 When I started this blog a couple years ago, I tried to think of perhaps the most iconic thing about Michigan football.  Obviously the helmets are unlike anybody else’s in the FBS.  And Bo Schembechler is an icon.  But the one thing that stood out to me that I hadn’t seen at any other school is the GO BLUE M CLUB SUPPORTS YOU banner that the players and coaches touch prior to each home game.

Until recently, however, I never knew the origins of the banner.  John U. Bacon was helpful enough to explain the banner’s origins in a recent podcast:

In 1962, the Wolverines lost five of their first six games, including four straight Big Ten losses– three of them, shutouts.

The head hockey coach, Al Renfrew, had been a classmate of [Bump] Elliott’s, and the two had remained good friends. So Renfrew and his wife Marjorie decided to do something to help boost the football team’s morale. Marjorie went to work in her sewing room, stitching a yellow block “M” on a blue sheet, about six feet across.

So now we know.