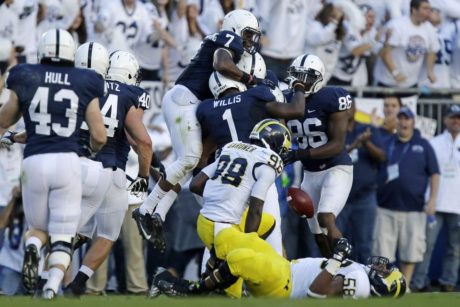 Michigan deserved to lose. You win when you deserve to win, and Michigan didn’t deserve to win. From the offensive play calling to the offensive line’s incompetence to the quarterback’s decision making to the defense’s inability to get pressure and cover short passes to the special teams’ inconsistency, Michigan didn’t deserve a victory. Penn State didn’t play their best football, either, but they looked less incompetent.

The coaches have lost confidence in Devin Gardner as a passer. There was a time when Brady Hoke and Al Borges would have let quarterback Devin Gardner air it out in a game like this, but instead, they chose to curl up into the fetal position – almost literally – and try to luck their way into a victory. Despite averaging just 2.8 yards/carry on fifty-four  rushing attempts, Michigan turned overtime into mostly an unproductive rushing effort. Michigan ran for 1, 1, 0, 3, -3, 8, 0, 0, and 7 yards in overtime, with that last 7-yarder coming on a Gardner scramble. The biggest offense came in the first overtime, when the play call/execution resulted in Gardner running from the 23-yard line on the left hash to the 23-yard line on the right hash on 3rd-and-8, presumably in an effort to “center” the ball for kicker Brendan Gibbons. Gibbons’s subsequent 40-yard field goal was blocked by defensive tackle Kyle Baublitz.

The offensive line is/was a mess. All-American left tackle Taylor Lewan left the game in the second quarter with what looked like an injury to his left side, perhaps a hip or a rib. He was replaced by right tackle Michael Schofield. Left guard Chris Bryant was presumably replaced for poor performance after some poor blocking; in came walk-on guard Joey Burzynski. Redshirt sophomore Graham Glasgow was playing left guard two weeks ago and has had several mental mistakes in his two games at center. Right guard Kyle Kalis took a senseless 15-yard penalty and was replaced for a short time by Burzynski before returning. The right tackle for the second half was redshirt freshman Erik Magnuson. Another walk-on, Erik Gunderson, also saw significant playing time in certain packages. Overall, by the end of the game, the only guy in the same spot as two weeks ago was Kalis. Meanwhile, running backs Fitzgerald Toussaint and Derrick Green were swarmed in the backfield the entire game, totaling 30 carries for 28 yards.

Offensively, the lone bright spot was Devin Funchess. Tight end Devin Funchess had his second consecutive 100-yard game with 4 catches for 112 yards and 2 touchdowns. He also had a couple key drops, but a tight end with 263 yards and 3 touchdowns in two games is pretty impressive.

Damn freshmen. Maybe I’m being a bit harsh, but a huge chunk of this loss falls on the shoulders of freshman cornerback Channing Stribling and whichever defensive coach was responsible for putting him in there. At the end of regulation, Stribling entered the game and was beaten on two long passes by the average Brandon Felder and Penn State standout receiver Allen Robinson. On both occasions, Stribling had chances to knock down or intercept the passes, but he mistimed his jumps and/or misjudged the ball, failing to get even a finger on either pass. The game was just moving too fast for him, which is why I hate having to play so many young players. In a year or two, those will be picks or knockdowns for Stribling. The same thing goes for Jake Butt’s failure to catch a back shoulder fade from Gardner in overtime; Butt showed his hands too early and failed to plant and go up for the ball. Instead, he settled for trying to catch it with his momentum going away from the ball and into the sideline. Both of things contributed to linebacker Mike Hull being able to bat the pass away at the last second despite not turning around for the ball.

Michigan can’t run the ball, and that’s not going to change. At this point in the season, I feel pretty confident in saying that nobody but Gardner will be able to run the ball effectively. Gardner even carried the ball 24 times, and he’s not going to hold up with that type of responsibility on his shoulders. I hate to say this, but Michigan needs to ditch the runs from under center and become a team that throws the ball 40-45 times a game. They need to get creative with their screen game, including bubbles and slip screens; they also need to find a way to get Dennis Norfleet on the field in regular packages and incorporate him into the offense, both as a scatback third-down replacement for Toussaint and as a slot receiver.

Despite the 43 points, I thought the defense played pretty well overall. Nine of those 43 points came in overtime. Additionally, two of Penn State’s touchdowns came after Gardner interceptions, which gave the Nittany Lions the ball on the 14- and 20-yard lines, respectively. They ran the ball 44 times for 85 yards (1.9 yards/carry) and 2 touchdowns, from the 1- and 2-yard lines, respectively. Penn State quarterback Christian Hackenberg completed 23/44 passes for 305 yards and 3 touchdowns, but he was also sacked 4 times and intercepted twice, while a large chunk of that yardage (79) came on the final drive in regulation when they beat Stribling.

Frank Clark is coming on. Clark had 3 tackles, 2 tackles for loss, 2 sacks, 1 pass breakup, and 2 fumble recoveries, one of which he picked up and ran 24 yards for a touchdown. He’s had a little bit of a fire lit under him after the first couple games of the season, and hopefully that fire stays lit. After barely showing up on the stat sheet early, he’s now sitting at 15 tackles, 4.5 tackles for loss, 3.5 sacks, 1 pass breakup, 5 quarterback hurries, 2 fumble recoveries, and the aforementioned touchdown return.

What does this all mean? Well, I don’t think Michigan has a shot at winning the Big Ten this year. They’ve been playing with fire all year in close games with Akron and UConn, not to mention Notre Dame or the closer-than-it-should-have-been game against Minnesota last week. It finally bit them in the butt. The closest thing remaining to a team Michigan should  beat easily is Iowa, but they always seem to play Michigan tough, especially in Iowa City. Michigan also has Indiana’s number over the years, but the Hoosiers can put some points up on the board (41.7 points/game). Michigan State is going to feast on Michigan’s running game, Nebraska’s tough, Northwestern is good when healthy, and Ohio State is probably going to crush us. This is probably going to be ugly down the stretch.