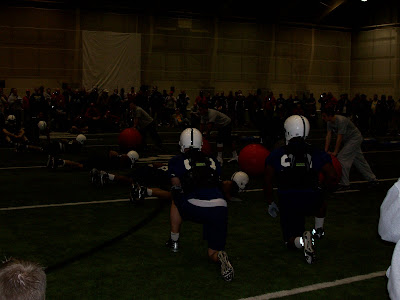 Saturday morning began with some special teams drills run by Larry Johnson and Bill Kenney. The other coaches and I were too busy scarfing down bacon – crispy, the way fatty pig parts should be – at the hotel to get there in time for the special teams sessions.
For the rest of the morning, each coach on the staff brought his position group out for twenty minutes of explanation and demonstrations. I thought it was interesting that each coach has some sort of mirroring drill they use regularly, in which the offensive player has to mimic the defensive player’s movements or vice versa. All the coaches were very particular about footwork.
I expected the offensive linemen and defensive linemen to be huge. What I didn’t expect was that Andrew Quarless, the starting TE, would be the size of a Volkswagen. A Volkswagen Beetle, but a Volkswagen nonetheless. I’m a pretty big guy, and he dwarfed me.
The highlights of the morning were when Larry Johnson had his defensive linemen do their drills. He does a lot of work with things that look like inflatable exercise balls, but they’re solid and cost $150 apiece. To emphasize staying low and punching with the hands, managers roll these balls toward the players and they have to reach out with both hands and reverse the ball’s direction before continuing on with the rest of the agility drill. Please excuse my crappy photography, but a picture of this drill is above.
The other highlight was Bill Kenney. He coaches the tackles and tight ends, and he’s hilarious. While the rest of the coaches shied away from any foul language, he said “goddammit” and “shit.” An excerpt came when his players were working on a combo block and one of his tight ends forgot to block a stunting linebacker in the drill. Kenney said, “That’s what we call an ‘Oh Shit Block.’ As in ‘Oh . . . shit, I’m supposed to block him.'”
Overall, I didn’t learn too much from Kenney that I didn’t already know. He did talk about ball security amongst his tight ends, though. He said he wants them to keep four points of contact with the ball when carrying it – hand, forearm, biceps, ribcage – but that he never wants them running with two hands on the ball. He said if they get into traffic, they’re supposed to roll the ball onto their breastplate and maintain four points of contact, with the chest replacing the ribcage; he wants the off arm free for stiff-arms. This seems like a recipe for fumbles, but who are us Michigan fans to talk? We averaged about the same number of turnovers last year as Michigan State’s basketball team had last night.
Zing!