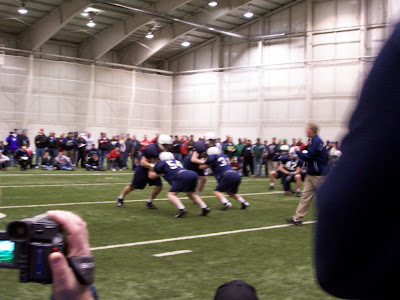 On Saturday afternoon, Penn State held practice from 1:30 until 2:30 and then held an offense-defense scrimmage until 3:30. I started to pull out my camera to take pictures until I was reminded that we weren’t allowed to take pictures of practice, only drills. Oops.
A few notes:
From the way it looked to me, Kevin Newsome is behind redshirt freshman walk-on Matt McGloin on the depth chart. McGloin isn’t anything special, but he looks more comfortable in the pocket and he’s more accurate than Newsome. We knew this already, but if Daryll Clark gets hurt, the Nittany Lions are screwed.
Kevin Newsome is not ready to be a college QB. He was highly ranked early in the 2009 recruiting cycle until he started showing up to camps resembling a drunken discus thrower; that thing will fly a long way, but it might kill a bystander in the process. Newsome patted the ball, even in one-on-ones. He gave all kinds of unintentional pump fakes because he didn’t know when to throw the ball. As I mentioned in a previous post, in the time I was watching him during one-on-one drills (WR vs. DB) on Friday afternoon, he completed 3/15 passes. His throwing motion is inconsistent, but usually it comes from a sidearm delivery. If his passes miss their target (which they often do, obviously), they usually sail high. He has happy feet and because of that, he doesn’t step into his throws properly; when he finally throws the ball, it looks rushed and he fails to throw downhill, which also contributes to his passes sailing high.
Newsome does have a very strong arm. Seemingly without much effort, he was throwing the ball 60 or 65 yards. He hit a deep ball in one-on-ones that got safety Nick Sukay chewed out by Joe Paterno. I was unable to stay for the last fifteen minutes of the scrimmage, but Newsome completed 1/1 pass (a short crossing pattern) that gained about 11 yards and then scrambled for about 12 yards on a separate play. I was somewhat surprised that they didn’t have him throw the ball more, but I guess he had better get used to the running game, since that’s all he should be doing if Clark gets injured. I’m glad we got Tate Forcier instead of Newsome. Newsome has the size, speed, and arm to be a very good quarterback, but there’s a lot of work to be done between now and then.
Michigan fans are up in arms about running a three-man front. Penn State runs a three-man front, which a lot of people don’t realize. They have a strongside rush linebacker. He does drills mostly with the linebackers. When the defensive line does drills, Larry Johnson runs them with three guys down. Yet most people would say that PSU runs a 4-3, so this 3-4 that Michigan might run really doesn’t have to be a big deal.
I was looking forward to seeing Stephfon Green run the football, but he has some kind of injury and was sitting out. Evan Royster was still fun to watch, though; he had about a 40-yard TD run, but that might be partly because PSU’s secondary has been decimated by senior departures.
Linebacker Chris Colasanti, from Lakeville, MI, was playing inside linebacker with the second team. He didn’t look spectacular, but I have no doubts that Ron Vanderlinden will coach him up. He did have a play during seven-on-sevens in which he deflected the ball to himself and then made the diving INT.
I am not particularly afraid of PSU for 2009. I expect that the offensive backfield will be excellent with Clark, Royster, and Green, and the front seven will be decent despite the departures of Maurice Evans and Aaron Maybin. But the receivers and offensive line aren’t impressive, and the defensive backfield is severely lacking talent and depth.