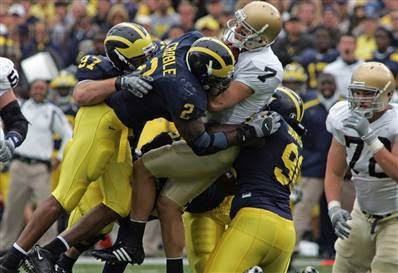 Old rivals come together on Saturday at 3:30 p.m. Two teams that have been down for a couple years suddenly have reason for optimism, but one is going to end this weekend disappointed with at least a few fans calling for their coach’s head.

Rush Offense vs. Notre Dame Rush Defense
This is the one area where Michigan should have a big advantage. With three seniors and two juniors on the offensive line, not to mention four returning starters, Michigan should be able to run the ball. Notre Dame’s defensive front seven have decent size, but they’re not very stout. Notre Dame will have to stunt linebackers to get penetration, but Michigan’s running backs have the speed and elusiveness to make the Irish defense pay for missed tackles and blitzing out of control. Michigan can run the ball out of the I-formation even if starting fullback Mark Moundros misses the game Saturday, and the Wolverines showed last year that they can run the ball from the shotgun spread formation as well.
Advantage: Michigan

Pass Offense vs. Notre Dame Pass Defense
I’m not too concerned about Michigan’s ability to protect the quarterback, but the Notre Dame defensive backfield should be significantly better than Western Michigan’s. Tate Forcier should start and play the majority of the game, but Michigan’s receivers might not be quite as open as they were last week. The Wolverines should be able to take advantage of mismatches in the slot and at tight end, but I don’t expect the receivers on the outside to be able to get deep on the Irish defensive backfield. I expect this to be a bit of a dink-and-dunk offensive week for Michigan, getting Martavious Odoms, Kelvin Grady, and Carlos Brown open in the flats and hoping they can make safeties and linebackers miss. However, Notre Dame has experienced safeties and I doubt the downfield passing game will be a huge threat.
Advantage: Notre Dame

Rush Defense vs. Notre Dame Rush Offense
With Michigan’s improved tackling and speed this season, open space may not be their biggest enemy anymore. However, if Notre Dame lines up in power run formations and tries to come right at Michigan, that could be problematic. Notre Dame has a stable of solid (albeit unspectacular) running backs, and Michigan’s linebackers – particularly Obi Ezeh – have struggled with taking on lead blocks and filling gaps. Notre Dame also has the ability to attack SAM linebacker Steve Brown in the run game, which should be Brown’s first real test against taking on kick-out blocks. Nose tackle Mike Martin and defensive end Brandon Graham can probably cause fits for Notre Dame’s offensive line, but the Irish might be able to take advantage of the opposite side of the line.
Advantage: Michigan

Pass Defense vs. Notre Dame Pass Offense
This part scares me. A lot. Michigan fans might hate The Emu and laugh about his Yakety Sax performance from two years ago, but Clausen has turned into a pretty good quarterback. He has a very strong arm and he’s accurate (15-18 last week). Michigan is breaking in two new starting safeties (one of whom got beat for a 73-yard TD pass against WMU), and even with two good cornerbacks, the Wolverine defensive backs are probably no match for wide receivers Golden Tate and Michael Floyd. Tate abused Michigan in the 2008 version of this game, and Michael Floyd abused Boubacar Cissoko in the 2008 Army All-American game. Defensive coordinator Greg Robinson has to decide whether he wants to keep Donovan Warren in position as the field cornerback or if he wants Warren to lock up with Michael Floyd wherever Floyd goes on the field. Lining up Floyd outside and Tate in the slot could force some mismatches I don’t even want to mention . . . but I will – Golden Tate in man coverage with Steve Brown. Yikes. Ugh. Please. God. No. I would rather see Cissoko follow Tate into the slot and have Brown cover a third wide receiver on the outside, such as Duval Kamara or Robby Parris. And I haven’t even mentioned Notre Dame tight end Kyle Rudolph, although I expect him to have a minimal impact because I think Brown and Obi Ezeh will be decent enough at covering him. Clausen will end this game with many yards . . . and after being sacked a few times.
Advantage: Notre Dame

Special Teams
Golden Tate is a talented runner, but Zoltan Mesko is a talented punter. Michigan’s coverage teams have been pretty solid, and I’ll expect that they remain that way. After last year, I still don’t trust Michigan’s returners to hold onto the ball. I’ve always contended that Greg Mathews is a solid punt return man, if only because he’s sure-handed. Neither placekicker has much status in the world, so I’ll say Zoltan > Tate.
Advantage: Michigan