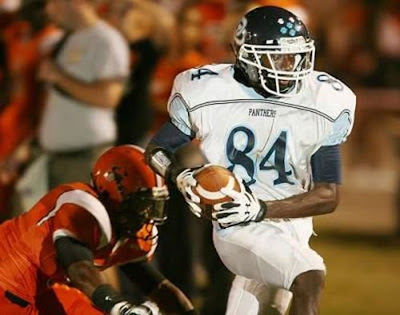 So far the most successfully recruited position group for the 2010 class has been wide receivers and slot receivers. In total, Michigan’s coaches have secured six commitments from that group. Four of them are wideouts (Ricardo Miller, Jeremy Jackson, D.J. Williamson, and Jerald Robinson); the other two are slots (Drew Dileo and Tony Drake).

Five of those commitments came very early on in the process, and I have maintained since then that not all of these wide receivers would end up signing with Michigan in February. Whether someone is slow-played into decommitting, doesn’t qualify, or chooses another school instead, not all six of these kids will end up wearing a Michigan uniform. Fitting with that theory, recent rumors suggest that slot receiver Tony Drake has yet to qualify for admission to the University of Michigan. Although cornerback Adrian Witty from the Class of 2009 did eventually qualify, he had to sit out the 2009 season; the coaches will surely try to avoid a similar situation in 2010.

The only two uncommitted receivers who have Michigan offers are Kenny Shaw (Orlando, FL) and Chris Dunkley (Pahokee, FL). Dunkley received an early offer from Michigan, but he never had much interest in coming to Ann Arbor. Shaw, on the other hand, is still being actively recruited by the Wolverines. His former teammate is none other than Ricardo Miller, who has perhaps been Michigan’s best recruiter. I expect that Shaw will end up staying down south, but there’s a possibility that he could take the spot of Drake (if the latter fails to qualify) or another wide receiver who might decommit.