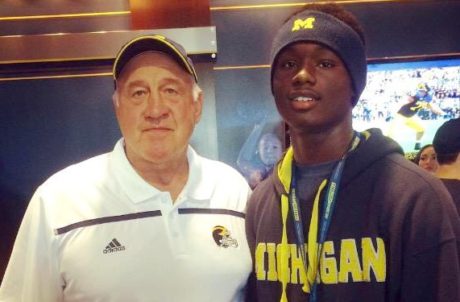 Ovie Oghoufo with Greg Mattison (image via Today’s U )

Los Angeles (CA) Hawkins safety Aashari Crosswell was offered by Michigan. He’s a 6’1″, 185 lb. prospect with offers from Arizona, Arizona State, Florida, Nebraska, Notre Dame, and USC, among others. He’s a 247 Sports 4-star, the #10 safety, and #103 overall. He camped at Michigan last week. He’s a teammate of 2018 wide receiver Jalen Hall and 2017 wide receiver Joseph Lewis, along with several other Michigan targets.

Knoxville (TN) Catholic offensive tackle Cade Mays, a Tennessee commit, was offered by Michigan a while ago but didn’t report it initially. He’s a Tennessee legacy who has been committed to the Volunteers since July of 2015. He’s a 247 Sports 4-star, the #3 offensive tackle, and #29 overall, and already committed to play in the 2018 U.S. Army All-American Bowl.

Hit the jump for some other new offers and a few guys who committed elsewhere.

Farmington Hills (MI) Harrison linebacker Ovie Oghoufo was offered by Michigan. He’s a 6’3″, 207 lb. prospect with offers from Kentucky, Michigan State, Notre Dame, and Syracuse, among others. As a sophomore in 2018, he made 66 tackles, 19 tackles for loss, 8 sacks, and 3 forced fumbles, and he claims a 4.72 forty. Oghoufo is a long, lean outside linebacker type who could grow into an inside linebacker, a defensive end, or maybe a tight end at the next level. His cousin is former Michigan defensive end Mario Ojemudia, but Oghoufo has two Crystal Ball picks in favor of Michigan State.

Los Angeles (CA) Hawkins linebacker De’Gabriel Floyd was offered by Michigan. He’s a 6’2″, 218 lb. prospect with offers from Arizona, Colorado, and Pitt. He’s a teammate of 2018 safety Aashari Crosswell (see above), and both camped at Michigan last week.

Laie (HI) Laie Park quarterback Sol-Jay Maiava was offered by Michigan. He’s a 6’1″, 170 lb. prospect whose first offer is from the Wolverines. He participated in Michigan’s football camp in Honolulu.

Jersey City (NJ) St. Peter’s Prep defensive end Jayson Ademilola and linebacker Justin Ademilola committed to Notre Dame. The twin brothers were offered early by Michigan, and the Wolverines were reportedly strongly in the running. However, they were also big fans of the Fighting Irish, and when they got offered, they took advantage.

Snellville (GA) South Gwinnett defensive tackle Robert Cooper committed to Florida State. A top-100 recruit, according to 247 Sports, Cooper was offered recently by the Wolverines but he never visited.

Indianapolis (IN) Cathedral running back Markese Stepp committed to Notre Dame. Stepp, a classmate of offensive guard Emil Ekiyor, was offered by Michigan in recent months and worked out at the satellite camp in Indiana. The Fighting Irish were going to be tough to beat all along, however, and 2017 teammate Pete Werner is committed there, too.

Westerville (OH) South running back Jaelen Gill named Michigan to his top nine. A top nine list from a 2018 prospect may not sound all that exciting, but he’s the #1 all-purpose back in his class and the #1 player in the state of Ohio.