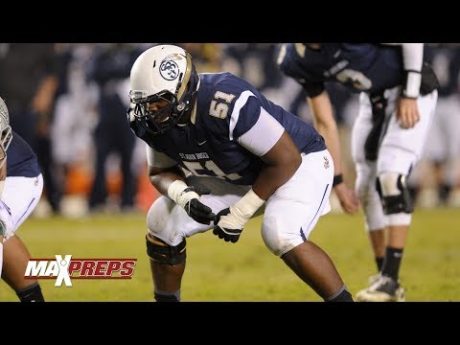 ADDED TO THE BOARD: 2015
Bellflower (CA) St. John Bosco offensive guard Zach Robertson was offered by Michigan. He’s a 6’5″, 308 lb. prospect with offers from Arizona State, Arkansas, Notre Dame, Oklahoma, UCLA, USC, and Washington, among others. He’s a 247 Composite 4-star, the #14 offensive guard, and #259 overall. He claims a 340 lb. bench, a 465 lb. squat, and a 5.4 forty. Robertson is a punishing blocker on the move who I believe fits best at offensive guard, though he’s a tackle in high school. He has said that he wants to take an official visit to Michigan, but the current line of thinking is that he’s bound for UCLA, where high school teammate (and fellow Michigan offeree) Josh Rosen is committed.


OFF THE BOARD
Reisterstown (MD) Franklin offensive guard Patrick Allen committed to Georgia. Georgia was considered the favorite, but Michigan was up there in his top few schools. Allen has said that he still wants to see Michigan on an official visit, so the door isn’t completely closed. His 2016 teammate, wide receiver Steven Smothers, also holds a Michigan offer.

Sicklerville (NJ) Timber Creek wide receiver Cameron Chambers, a 2016 prospect, committed to Michigan State. He visited Michigan and Michigan State the weekend prior to his decision, so it was a bit of a nail-biter to see whether he would choose the Wolverines, although they were thought to be playing from slightly behind. Ohio State was also in the mix. As Michigan has seen with its own early commits, it’s a long time between now and signing day for 2016 prospects.

Warren (OH) Harding center James Daniels committed to Iowa. Daniels has an older brother who’s a freshman running back at Iowa, so the Hawkeyes were thought to be the leaders. Michigan has had a lot of success at Harding over the years (Carl Diggs, Prescott Burgess, Mario Manningham, D.J. Williamson, Davion Rogers), but they have struck out recently.

Bradenton (FL) IMG Academy quarterback Deondre Francois committed to Florida State. This was – and will be – a highly interesting development, because the Seminoles already had two touted quarterbacks (De’Andre Johnson, Kai Locksley) committed in the 2015 class. Taking two quarterbacks in one class happens fairly frequently, but three in one year is almost unheard of. At least one of these guys will flip elsewhere by the time all is said and done.

Tampa (FL) Wharton wide receiver Auden Tate committed to Florida State. At one point Tate called Michigan’s offer a “dream offer” and he has left the door open for an official visit to Ann Arbor. Tate was considered Michigan’s best chance to land a second wide receiver in the class, so the Wolverines may have to expand their offer list if they want another wideout.