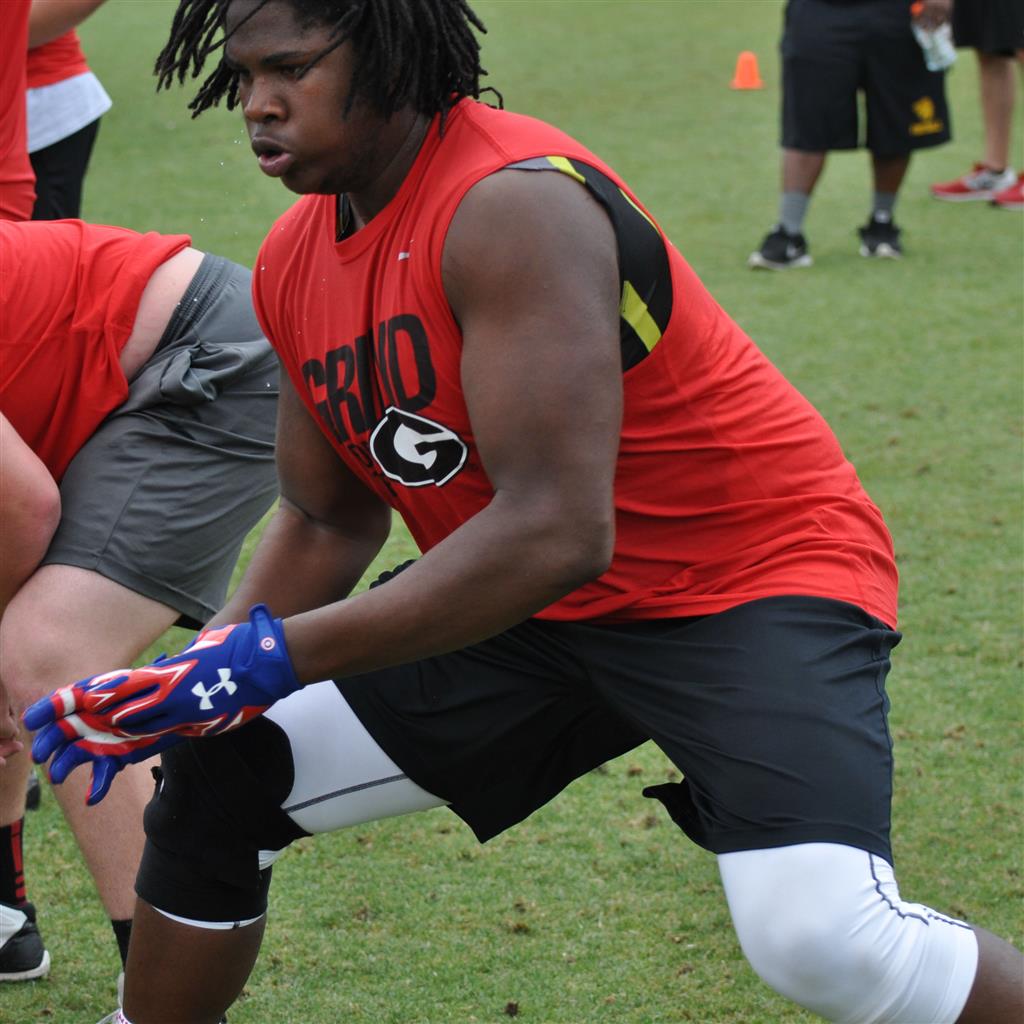 This is a huge recruiting update. I am a masochist.

ADDED TO THE BOARD: 2015
Reisterstown (MD) Franklin offensive tackle Pat Allen decommitted from Georgia. He was supposedly leaning toward committing to Tennessee on Sunday night in the Semper Fidelis All-American Bowl, but he ended up not announcing a decision at all. That is supposedly because he is re-considering the Bulldogs. Allen visited Michigan in the fall for an official visit, so a concerted effort by Harbaugh could get the Wolverines back in the mix.

Winter Garden (FL) West Orange running back Dexter Williams decommitted from Miami. A long-time Miami commit, he had been wavering for a while. In early December he said he was on track to graduate early and enroll at Miami in January, but that has fallen off. A reported score of 17 on his ACT might hamper his chances of qualifying at some schools, but he took an official to Louisville, has one set to Notre Dame, and is being pursued hard by Florida. Williams is a 6’0″, 192 lb. prospect who’s a 247 Composite 4-star, the #10 running back, and #83 overall.

OFF THE BOARD
Miami (FL) Booker T. Washington tight end Devonaire Clarington committed to Texas at the U.S. Army All-American Bowl. Clarington played defensive end his senior, but he is expected to be an offensive player for the Longhorns.

New Orleans (LA) Warren Easton wide receiver Tyron Johnson committed to LSU at the Under Armour All-American Game, which was exactly what everyone expected.

McKinney (TX) North running back Ronald Jones II committed to USC at the Under Armour All-American Bowl. He had previously been committed to Oklahoma State.

Manassas (VA) Stonewall Jackson defensive tackle Tim Settle committed to Virginia Tech during the Under Armour All-American Game. At one time Settle was presumed to be leaning toward Ohio State, and he was also friendly with 2014 defensive end Da’Shawn Hand (Alabama), who was thought to be a draw at one time (Settle also had an Alabama offer).

Hit the jump for a bunch of brief profiles on potential recruits to look at for 2015, plus some miscellaneous recruiting tidbits from the last week or two.

PLAYERS I WOULD LIKE MICHIGAN TO PURSUE (in order of position)
Kyle Kearns – QB – Pleasanton (CA) Foothill: Kearns is a 6’3″, 195 lb. prospect with an offer from SMU, although he decommitted in early December. I have no idea why Kearns hasn’t garnered more offers, but I was very high on him when I evaluated potential quarterbacks early in this recruiting cycle (LINK). Michigan does not have an heir apparent at the quarterback position, the backups have played poorly, and there aren’t many options. Michigan will only have three or four quarterbacks on the roster this fall, depending on whether Russell Bellomy returns for a fifth year or not. Kearns is a 247 Composite 3-star, the #17 pro-style quarterback, and #459 overall.


Mike Weber – RB – Detroit (MI) Cass Tech: Weber is a 5’10”, 205 lb. prospect who was previously committed to Michigan, decommitted in late November, and then pledged to Ohio State in early December. He’s a 247 Composite 4-star, the #13 running back, and #94 overall. Head coach Jim Harbaugh reportedly talked to Weber’s father immediately upon being hired, and the coach has also encouraged commits to work hard on Weber, so Michigan is kicking the tires on the solidity of his commitment to the Buckeyes. Weber has said he’s solid with Ohio State, but his phrasing suggests the door is at least cracked open.

Dexter Williams – RB – Winter Garden (FL) West Orange: Williams is a potentially dynamic running back, and while his academic situation might be a bit of a question mark, he could be a fall-back option if the Mike Weber situation fails to pan out in Michigan’s favor.

Cordell Broadus – WR – Las Vegas (NV) Bishop Gorman: Broadus is a 6’2″, 195 lb. prospect who took an official visit to Arizona State and also has UCLA and USC on his list. He’s a 247 Composite 4-star, the #18 wide receiver, and #149 overall. Upon Harbaugh’s hiring, he said that he would definitely be interested in visiting Ann Arbor, even though he has not reported an offer from the Wolverines at any point. Broadus is the son of rapper Snoop Dogg/Snoop Lion. Broadus does not look to me like a true blazer, but he is fast enough to stretch the field a little and does a nice job of adjusting to the ball in the air.

DaMarkus Lodge – WR – Cedar Hill (TX) Cedar Hill: Lodge is a 6’2″, 190 lb. prospect who was previously committed to Texas A&M; he also is considering Baylor, LSU, Ole Miss, Texas, and USC. He’s a 247 Composite 4-star, the #7 wide receiver, and #37 overall. As a senior this past season, he caught 63 passes for 1,218 yards and 25 touchdowns. Lodge pretty much ignored Michigan’s initial offer under Brady Hoke, but he has said that he would like to hear from Harbaugh

Auden Tate – WR – Tampa (FL) Wharton: Tate is a 6’4″, 215 lb. prospect who is committed to Florida State. He was very high on Michigan at one point and took an official visit in November. Tate is a 247 Composite 4-star, the #30 wide receiver, and #241 overall. Michigan needs an influx of talent – especially speed – at the wide receiver position, and Tate doesn’t fit the role of a speed guy. However, with Michigan needing to fill the class in the span of about five weeks, he should be a target.


Chris Clark – TE – Avon (CT) Old Farms: Clark is a 6’6″, 247 lb. prospect with a top three of Michigan, Michigan State, and UCLA; he was committed to Michigan until Brady Hoke was fired. He’s also a 247 Composite 4-star, the #2 tight end, and #80 overall. He has expressed excitement about the hiring of Harbaugh, so I am leaning toward expecting him to re-commit to the Wolverines.

Chuma Edoga – OT – Powder Springs (GA) McEachern: Edoga is a 6’3″, 276 lb. prospect who is committed to USC. He’s a 247 Composite 5-star, the #3 offensive tackle, and #16 overall. Edoga really wanted a Michigan offer early in his recruitment, and he camped at Michigan for four days last summer. It was a little difficult for a lot of Michigan followers to understand why the Wolverines didn’t offer to start, and then he committed to the Trojans in April. New Michigan offensive coordinator Tim Drevno would have been Edoga’s position coach at USC, although he was not the primary recruiter. Michigan could use another lineman in this class, as the only current commit (Grant Newsome) will join a squad with a full complement of upperclassman linemen. UPDATE: Edoga tweeted last night that Coach Harbaugh called but that it was “just a lil too late lol.”

Keisean Lucier-South – DE – Orange (CA) Lutheran: Lucier-South is a 6’5″, 225 lb. prospect who has been committed to UCLA since late November. He was extremely high on Michigan at one point and called it his dream school, but the disappointing season seemed to push him toward the Bruins, another school he liked from the beginning. Michigan needs an edge rusher, and Harbaugh might be able to make it happen with his California connections.

Tyrone Wheatley, Jr. – DE – Manlius (NY) Canisius: Wheatley is a 6’6″, 265 lb. prospect with offers from everywhere, including Alabama, Michigan, UCLA, and USC, among others. He’s a 247 Composite 4-star, the #10 tight end, and #235 overall. Wheatley could play tight end, defensive end, or offensive tackle at the next level, and he looks most like a defensive end to me. Wheatley is, obviously, the son of former Michigan running back Tyrone Wheatley, whose job as Buffalo Bills running backs coach is in flux. Wheatley, Jr. said recently that he had not heard from the new Michigan staff, and he sounded a little annoyed by that. The Wolverins have slipped out of his top group, but if Michigan hires his dad, that could change quickly. Even if his dad doesn’t get a job in Ann Arbor, I still believe Wheatley should be a priority.


Neville Gallimore – DT – St. Catharine’s (Ontario) Canada Prep Football Academy: Gallimore is a 6’3″, 300 lb. prospect with offers from Auburn, Florida State, Ohio State, and Oklahoma, among others; he committed to Oklahoma during the U.S. Army All-American Bowl. He’s a 247 Composite 4-star, the #10 defensive tackle, and #68 overall. He seemed open to going anywhere across the country, but Michigan offers a pretty unique location near his home province. The Wolverines have not offered, but Gallimore was a U.S. Army All-American (how does that  happen?) and he could be a space-eater in the middle.


Osa Masina – LB – Salt Lake City (UT) Brighton: Masina is a 6’4″, 230 lb. prospect with a top group that includes Arizona State, UCLA, and USC. He has an offer from Michigan, but he eliminated the Wolverines months ago, along with Utah, where his brother plays. Masina seems like a kid who will stick to what he says, so Michigan might not be able to get back into the fray, but it’s at least worth making a phone call or two. He’s a 247 Composite 4-star, the #5 outside linebacker, and #49 overall. Masina was a standout in the U.S. Army All-American Bowl last weekend.

Joshua McMillon – LB – Memphis (TN) Whitehaven: McMillon is a 6’3″, 239 lb. prospect who committed to Alabama in August, with Michigan finishing second in the race for his services. He’s a 247 Composite 4-star, the #15 outside linebacker, and #223 overall. Pulling him away from the Crimson Tide would be difficult, and he committed even before Michigan’s season started going downhill. But the boost from Harbaugh could move the needle a little bit.

Roquan Smith – LB – Montezuma (GA) Macon County: Smith is a 6’2″, 205 lb. prospect with offers from all over the place, and he is leaning toward Georgia. He’s a 247 Composite 4-star, the #4 outside linebacker, and #46 overall. He has not been offered by Michigan yet, but he does have a good relationship with Florida coach D.J. Durkin, who might be able to swing that into at least a visit if the Wolverines extend an offer. Michigan has not replaced Darrin Kirkland, Jr. (Tennessee) in this class and could also use a speed rushing threat off the edge, so Smith would be a welcome addition.


Marcus Lewis – CB – Washington (DC) Gonzaga: Lewis is a 6’1″, 187 lb. prospect with a top group that includes Kentucky, Miami, and Washington State. He’s a 247 Composite 4-star, the #10 athlete, and #129 overall. Lewis was previously committed to Virginia Tech and then Florida, so he has been pretty indecisive. At one point Michigan appeared to be his leader after the decommitment from Florida, but the poor season and Hoke’s shaky job status pushed them out of the picture. Now that Harbaugh has been hired, Lewis’s interest has been piqued once again. The Wolverines are still trying to replace Shaun Crawford (Notre Dame) and Garrett Taylor (Penn State), both of whom have decommitted.

Iman Marshall – CB – Long Beach (CA) Poly: Marshall is a 6’1″, 190 lb. prospect who is considered a USC lean, but he has also been rumored to have strong interest in Notre Dame and UCLA at times, and he has set an official visit to Florida State. Marshall is a 247 Composite 5-star, the #1 cornerback, and #3 overall. A summer workout partner of sophomore wide receiver Freddy Canteen, Marshall has said that he would like to set an official visit for January. He was a standout at the Under Armour All-American Game last Friday.

MISCELLANEOUS
Michigan’s quarterback in the 2016 class, Messiah DeWeaver, has transferred from Trotwood (OH) Trotwood-Madison to Huber Heights (OH) Wayne. Both are powerhouse schools in Ohio, and Michigan has strong connections to both. Players like Roy Roundtree, Michael Shaw, Brandon Moore, and Michael McCray II went to Trotwood, while players like Terry Talbott, Terrence Talbott, and Tyree Kinnel have gone to Wayne.

The high school All-American games took place in the past week, so here’s a look at some related tidbits: