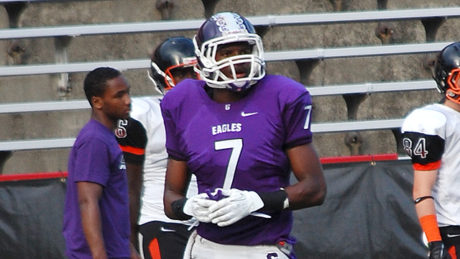 Washington (DC) Gonzaga cornerback Marcus Lewis decommitted from Florida. Lewis visited Michigan for the BBQ at the Big House last weekend and had a great time, according to all parties. It looks like the Wolverines might be on top in his recruitment, but he is also considering Florida (still), Miami, and Oregon. Lewis was attempting at one point to transfer to Bradenton (FL) IMG Academy, but those plans fell through and he will stay in D.C. for his senior year.

Destrehan (LA) Destrehan wide receiver Kirk Merritt was offered by Michigan. Merritt is a 5’11”, 206 lb. prospect with offers from Alabama, Auburn, LSU, and Notre Dame, among others. He’s a 247 Composite 4-star, the #3 all-purpose back, and #138 overall in the class. He recently won the SPARQ national championship at The Opening, which included a 4.46 forty and a nearly 46″ vertical jump. Michigan is recruiting him as a wide receiver even though he’s built like a running back or safety.

ADDED TO THE BOARD: 2016
O’Fallon (IL) O’Fallon running back Kentrail Moran was offered by Michigan. He’s a 5’10”, 192 lb. prospect with offers from Illinois, Indiana, Kansas, and Syracuse, among others. He’s a 247 Composite 4-star, the #18 running back, and #226 overall. As a sophomore in 2013, he had 1,140 rushing yards and 14 touchdowns. Moran is built like a power back and has decent speed. The Wolverines have long seemed like a favorite for Moran, so he could be Michigan’s back for the 2016 class.

Shreveport (LA) Calvary Baptist quarterback Shea Patterson decommitted from Arizona. Patterson was committed to Arizona prior to receiving a Michigan offer, and then pegged the Wolverines’ as a dream offer. He never visited and Michigan got a commit at his position in the form of Ohio’s Messiah DeWeaver. Patterson is more of a pocket guy than I would expect Rodriguez to truly want, though he does have some running ability. This may turn out as a positive for both parties, but Patterson is a quality prospect with offers from Alabama, Auburn, LSU, Notre Dame, and Texas, among others.

Fort Wayne (IN) Wayne defensive end Auston Robertson was offered by Michigan. He’s a 6’5″, 230 lb. prospect with offers from Indiana and Notre Dame, among others. He’s a 247 Composite 4-star, the #14 weakside end, and #207 overall. Robertson camped at Michigan in June, where the coaches had a chance to evaluate him. He visited for the BBQ this past weekend and was told that he had an offer, and while Michigan is currently looking at him as a defensive end, he could play tight end, too. His childhood favorite school was Ohio State.

Huntersville (NC) Southlake Christian Academy running back Robert Washington was offered by Michigan. He’s a 5’10”, 210 lb. prospect with offers from Florida, Nebraska, North Carolina, North Carolina State, Notre Dame, Ohio State, Penn State, Stanford, and UCLA, among others. He’s a 247 Composite 4-star, the #15 running back, and #174 overall. As a sophomore in 2013, he had 219 carries for 2,512 yards and 28 touchdowns. He also claims a 4.47 forty. Washington was previously committed to Mississippi State, but that ended in July 2013; he has visited Michigan unofficially numerous times, both before and after that commitment ended. Washington has developed a good relationship with area recruiter Roy Manning, but there are a lot of schools in play.

New London (NC) North Stanly running back Antonio Williams was offered by Michigan. He’s a 5’10”, 210 lb. prospect with offers from Florida and Wisconsin, and he decommitted from North Carolina earlier this month. He’s a 247 Composite 4-star, the #10 running back, and #123 overall. As a sophomore in 2013, he carried the ball 239 times for 2,401 yards and 22 touchdowns. Williams is another guy who has developed a strong relationship with Manning.

OFF THE BOARD
Detroit (MI) Cass Tech defensive tackle Joshua Alabi committed to Ohio State. Alabi held an early offer from the Wolverines, but the coaches have since taken the stance that defensive tackle is not a need in this class. He never seemed to be high on Michigan, and they never seemed to be too high on him, but it still hurts some perceptions that another Cass Tech kid would choose the Buckeyes. They do have a bit of history with Cass Tech players, with the likes of Vernon Gholston and Damon Webb.
Richmond (VA) Benedictine wide receiver Scott Bracey, a 2016 prospect, committed to Duke. Bracey is a superstar compared to what Duke normally gets. His teammate is defensive end Clelin Ferrell, another Michigan offeree, but one who committed to Clemson already.
Orchard Lake (MI) St. Mary’s linebacker Daelin Hayes, another 2016 prospect, committed to USC. Hayes was considered a Michigan lean until recently, and he had previously set an announcement date for late April, when he was presumably going to choose the Wolverines. A strange thing happened when Hayes did not receive an invitation to the BBQ at the Big House, which frustrated him a little bit. It was reportedly an honest mistake on the coaches’ part, but it may or may not be a coincidence that he visited Southern California and committed to the Trojans at roughly the same time he should have been attending the BBQ.

Houston (TX) Cy Falls defensive tackle Du’Vonta Lampkin committed to Texas. He had previously been committed to Oklahoma and never showed much interest in the Wolverines.

Tampa (FL) Sickles running back Ray-Ray McCloud III committed to Clemson. He was expected to commit to Florida for a long time until the tide started to turn in favor of the Tigers recently.

Here’s a list of the BBQ at the Big House visitors (LINK). Some names were added late while I was on vacation, so not all names are partnered with write-ups.