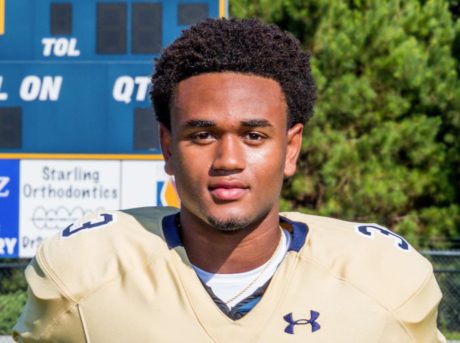 It’s been a while since I posted a recruiting update, so here are some updates from October and the first half of November.

Douglasville (GA) Douglas County center Parker Ball was offered by Michigan. He’s a 6’4″, 275 lb. prospect with no other offers from FBS programs.

Cleveland (OH) St. Ignatius linebacker Tommy Eichenberg was offered by Michigan. He’s a 6’3″, 225 lb. prospect who committed to Boston College back in June. He’s a 4-star, the #19 inside linebacker, and #358 overall. He visited Michigan for the Penn State game a few weekends ago. He’s the brother of Notre Dame offensive lineman Liam Eichenberg.

Dacula (GA) Dacula cornerback Jalen Perry decommitted from Georgia. He’s a 6’1″, 188-pounder whose crystal ball picks are currently 100% for South Carolina, but he took an unofficial visit to Michigan a few weeks ago and will visit officially this weekend. He’s a 4-star, the #19 cornerback, and #172 overall.

Bellflower (CA) St. John Bosco cornerback Chris Steele decommitted from USC. He’s a 4-star, the #6 cornerback, and #40 overall. He eliminated Michigan prior to picking the Trojans, and Florida seems to have picked up some steam in his recruitment.

Cedar Hill (TX) Trinity safety Lewis Cine committed to Georgia. When Michigan began recruiting Cine, he was in Don Brown’s territory of Massachusetts, but a move to Texas seemed to portend a downturn for Michigan’s chances. He tweeted out before his announcement that people thought they knew what he would do, but they had no idea . . . so he committed to Georgia, which had 83% of the crystal ball picks.

Carrollton (GA) Carrollton offensive guard Ty Murray committed to Louisville. Murray was a little-known prospect when he was offered by Michigan, and it seemed likely that he would commit to Michigan at one point. The longer it went without happening, the more it seemed like he maybe didn’t have a committable offer.

Frankfort (KY) Western Hills athlete Wandale Robinson committed to Kentucky. He’s a 4-star, the #4 all-purpose back, and #224 overall. He’s Kentucky’s only 4-star commit in the 2019 class. Robinson had been strongly considering Michigan at one point, but that ship sailed a while ago.