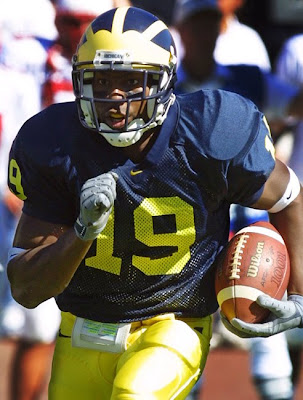 Ronald Bellamy: the only Laker I’ve liked since A.C. Green

Former Michigan wide receiver Ronald Bellamy was hired recently as the new head coach at West Bloomfield High School. Bellamy played for the Wolverines from 1999-2002 and in his career, he had 67 receptions for 888 yards and 9 touchdowns.

Spinal Column Online recently conducted an interview with Bellamy, who spent a handful of years in the NFL before getting into coaching high school ball. He mentions Lloyd Carr as an inspiration and a mentor, which is one of the things about Carr that makes me admire him most. For the most part, he seems like a man who maintained positive relationships with his players after they left Michigan.

Additionally, Bellamy has hired Zia Combs, another former Michigan player, as his defensive backs coach. Combs was temporarily paralyzed during a 2002 game against Penn State, which ended his playing career. Luckily, he seems to be completely healthy now.

Take a look at Ronald Bellamy torching MSU (2:26 in the video below):