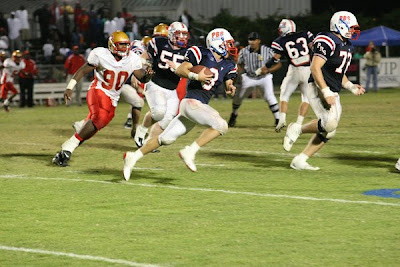 Drew Dileo has exactly one FBS scholarship offer. That offer came from the University of Michigan Wolverines. Dileo is a similar player to recent commit Tony Drake, so I’m not entirely confident that Michigan will hold a place for Dileo. But here’s what I can gather about him.

Scouting report: Good acceleration . . . Runs hard and does not look to avoid contact . . . Keeps feet moving in traffic . . . Good vision . . . Natural looking athlete . . . Excellent kick returner who looks to get upfield in a hurry . . . Good pass receiver who doesn’t mind going across the middle . . . Above average change of direction skills, although more of a slasher than an east-west runner . . . Attends a school with about 600 high school age students, so competition is questionable . . . Needs to add size and strength to power through a few more tackles . . . Running form could use some tweaking, as there’s too much wasted movement in his sprinting strides

Projection: Dileo looks to be a low to mid 3-star player. He’s a standout at a small school against weaker competition, but I question his ability to be fast enough or elusive enough to be a major contributor at the next level. Michigan is recruiting him as a slot receiver, but he could play running back; however, he will probably make his biggest impact in the return game.