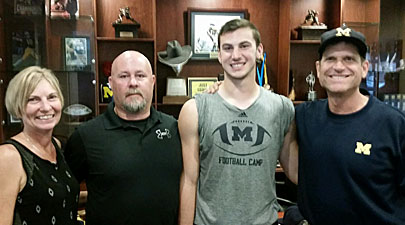 Dudley (MA) Shepherd Hill tight end Sean McKeon committed to Michigan on Monday. He chose the Wolverines over offers from Boston College, Connecticut, Massachusetts, Syracuse, and Virginia Tech, among others.

McKeon was offered relatively recently. He immediately set up a visit date to see Michigan, and that visit took place this past weekend. He slept on it for a night, and here we are. The speed of his process makes a lot of sense, not only because Michigan is his best offer, but because tight ends should be lining up to play for Jim Harbaugh.

I have an inherent trust for Harbaugh’s evaluations and usage of tight ends, so I will try not to let that color my evaluation of McKeon himself. But I do think there is a lot to like. First of all, he has good size without bad weight, and he should just be able to pack on some muscle before contributing. Once the play starts, the first thing that jumps out about him is that he shows good acceleration off the ball, and I think he will be able to get separation from linebackers with that initial speed burst. He also shows the ability to adjust to the ball in the air, whether it’s sliding to make a catch or going up to get it, where he can catch the ball with his hands outside the frame of his body. He is not an absolutely dynamic runner with the ball in his hands, but the first clip of his highlights shows a pretty amazing run-after-catch effort, and the offense also uses him on reverses, which is pretty rare for a tight end. McKeon is also a willing blocker who shows some pretty solid technique, and he has the feet and the hips to be effective in the run game.

On the negative side, Massachusetts is not known for its football talent, and the guys McKeon runs away from in the film are probably not going to be big-time recruits themselves. He is not a quick-twitch guy who will make people miss very often, and he is mostly a straight-line player, which is pretty standard for tight ends.

Overall, though he is a 2-star guy or unranked to a couple services, I think McKeon is a quality recruit. He reminds me of junior tight end Jake Butt in a lot of ways. Michigan should be able to get him in the flat or hit him on crossing routes, and a guy with decent speed who’s 250 lbs. or so will be tough to bring down for defensive backs.

McKeon’s commitment gives Michigan thirteen pledges in the 2016 class. He is the first true tight end in the class, though defensive end Rashad Weaver could be a blocking-type tight end. When McKeon arrives on campus, Butt will be a senior, and no other players have established themselves as true tight ends instead of H-backs (Khalid Hill, Ian Bunting, Henry Poggi, and Chase Winovich all seem like H-back types). The only other guy pegged for tight end is incoming freshman Tyrone Wheatley, Jr., who is 6’7″, 286 lbs. and could feasibly end up at another position. If McKeon can add a reasonable amount of weight, he could find himself battling for a starting gig as a sophomore.

The last Michigan recruit from Massachusetts was 2013 defensive tackle Maurice Hurst, Jr., and no Michigan player has ever come from Shepherd Hill.