For Michigan fans, maybe the most disheartening play of the 51-14 win over Central Florida was freshman running back Adrian Killins breaking off an 87-yard touchdown run against a defense that’s deemed one of the best in the country. Here’s how it happened: 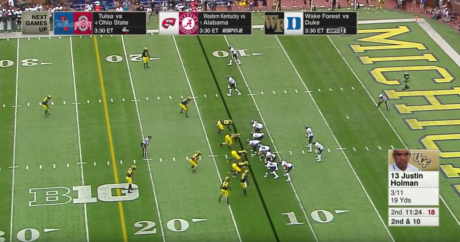 Above: Central Florida is in 12 personnel (1 RB, 2 TE) with a tight end left and an H-back in a wing position; on the other side, UCF has an inverted slot. The RB is to the strong side of the formation. Michigan is in a Cover 3 shell with safety Dymonte Thomas shading the twins side. Up front Michigan is in an Over G look with SAM linebacker Jabrill Peppers in a loose 9-technique (outside the tight end), MIKE linebacker Ben Gedeon aligned in the strong C-gap, and WILL linebacker Mike McCray splitting the difference between the weakside tackle and the slot receiver. It’s noteworthy that strong safety Delano Hill is two yards off the LOS outside the SAM linebacker, so Michigan has 6 defenders to the short side of the field. 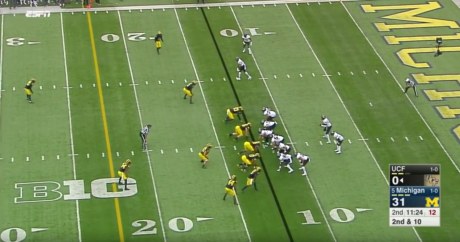 Above: The outside wide receiver comes in motion to tighten his split, which is key because now he has a good angle to crack down on McCray. He and the slot receiver will cross block the WILL and the corner to create a seam. Otherwise, the only change pre-snap is Stribling following the receiver in motion for a few yards. 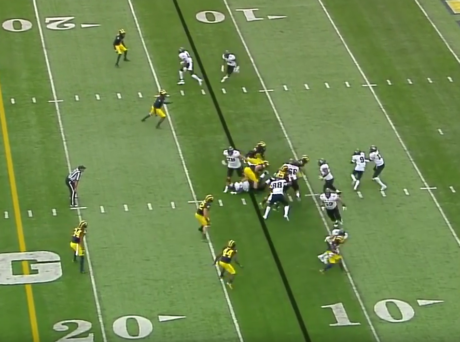 Above: Both offensive guards pull to the left as UCF quarterback Justin Holman reads WDE Marshall. Marshall, whose offensive tackle released inside, turns his shoulders to chase, but the read is coming at him. Holman can either hand the ball to running back Adrian Killins or keep it himself to follow his pulling guards. On the strong side, the H-back is kicking out a blitzing Jabrill Peppers at the 10-yard line and the TE is blocking down on SDE Chris Wormley. Holman isn’t reading the strong side, but it’s a good thing for him that he doesn’t keep it because there’s one pulling guard with two defenders standing in the hole. At the top of the screen, McCray is stepping up as the crease player to stop Killins while Stribling maintains contain to the sideline. The one guy not in the screenshot is free safety Dymonte Thomas. 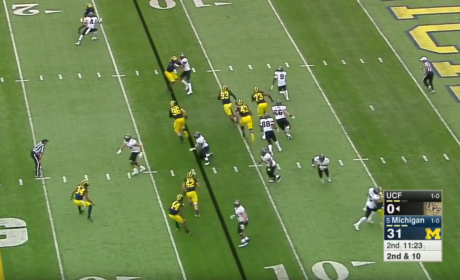 Above: With the defensive line in hot pursuit, McCray has tried to fight back outside of the WR’s crack block, while Stribling tries to squeeze down from his force position at corner. The WR has his hands extended but inside McCray’s frame, so it’s a difficult call to make as an official. You can see that defensive tackle Graham Glasgow (#96) has chosen to try to take an angle rather than coming straight down the line, since he knows he won’t catch Killins from behind. 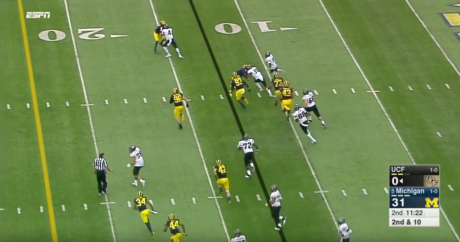 Above: Now McCray is trying to turn away from the block, which should necessitate a holding call if the officials can catch it. Stribling is maintaining his force position. Thomas still isn’t in the field of vision, and backside CB Jeremy Clark has just now turned to run. 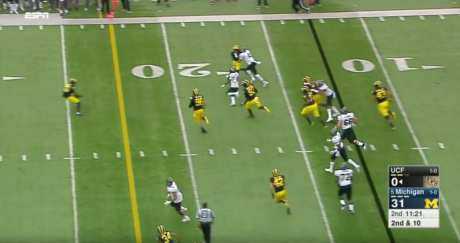 Above: The WR blocking Stribling has his hand extended now, and FS Dymonte Thomas now appears at 12 yards off the LOS after starting off 14 yards from the ball. Killins started off 5 yards behind the LOS, ran laterally, and is now 5 yards beyond the LOS, all while Thomas ran laterally and forward 2 yards. That speaks to the play call holding Thomas in the middle of the field, but it also shows just how quickly Killins gets to the edge. Thomas, meanwhile, is throttling down, despite losing more and more leverage with every step. 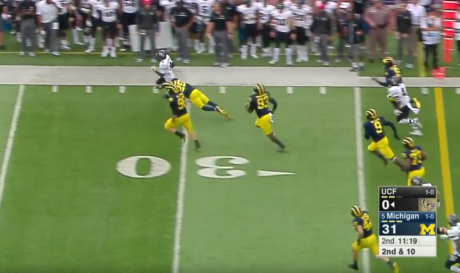 Above: As Killins crosses the 30-yard line, Thomas has lost leverage and flails helplessly as Killins speeds past him. Defensive tackle Glasgow is the next closest Wolverine, but despite the admirable hustle, he’s not going to catch a guy who runs a 10.3 in the 100 meters. 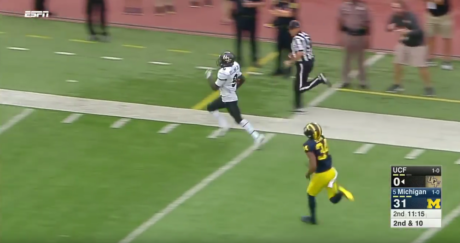 Above: Normally, this shot would be superfluous, as we all know that nobody caught Killins on his way to the score. The reason I took this screenshot is that backside CB Jeremy Clark comes onto the screen behind Killins at the 25-yard line. Few people, if anyone, on Michigan’s team are going to catch Killins.