April 25, 2011
Uncategorized
5 comments
admin
With a couple exceptions, the spring game was largely devoid of big plays for the offense.  This was the longest play from the line of scrimmage.  It’s the second team offense vs. the second team defense, but it gives us a good look at what the defense will be trying to do in 2011. 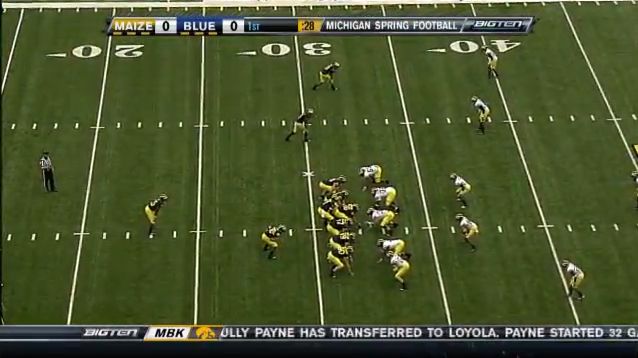 ABOVE: Prior to the snap, the defense is in a standard 4-3 under look.  FS Marvin Robinson is shifted over to cover the slot receiver, while SS Josh Furman is about 12 yards directly off the ball.  CB Terrence Talbott is walked off the line of scrimmage with only TE Mike Kwiatkowski on his side.  Meanwhile, H-back Ricardo Miller has motioned across the offensive formation and is now offset between the strongside OG and OT. 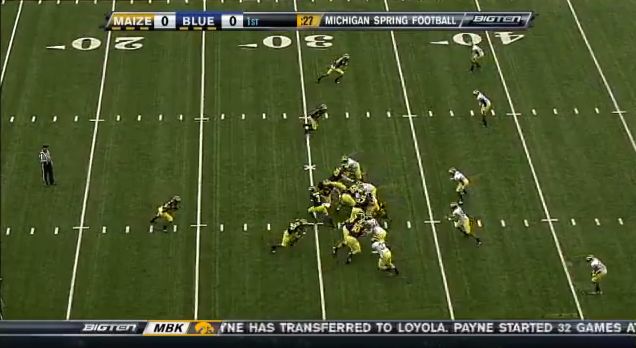 ABOVE: Initial action suggests it’s a power run.  LG Rocko Khoury is pulling across the formation; Kwiatkowski and RT Erik Gunderson are double-teaming LDE Ken Wilkins, who has stood straight up.  Meanwhile, MLB Brandon Herron reads run and immediately steps up to fill the hole.  NT Will Heininger gets outmuscled and collapsed away from the play.

ABOVE: As RB Michael Cox gets the handoff, LT Kristian Mateus whiffs on DE Jibreel Black, who’s totally and completely screwed if this is a rollout pass.  HB Ricardo Miller impacts SAM Jake Ryan with LG Rocko Khoury coming to help, while DE Ken Wilkins gets driven off the ball.  MIKE Brandon Herron steps up into the developing hole and WILL Brandin Hawthorne (?) flows to the ball.  CB Terrence Talbott has started to come up and support while FS Marvin Robinson follows his receiver across the field. 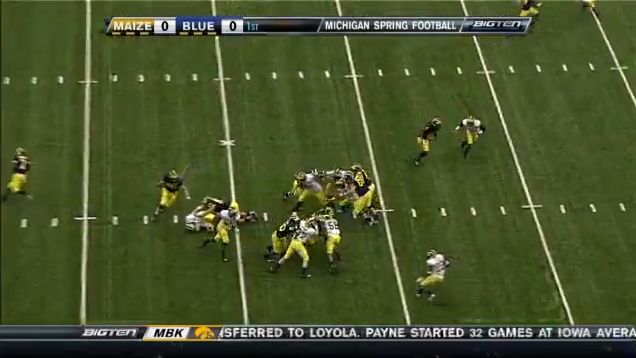 ABOVE: SAM Jake Ryan completely stones both blockers and stands his ground, while MIKE Brandon Herron meets RB Michael Cox about a half yard beyond the line of scrimmage; this should be stopped for a gain of a yard or two.  DE Jibreel Black missed Cox in the backfield and has run himself out of the play.  CB Terrence Talbott has stepped up in run support, and FS Marvin Robinson appears to see the ballcarrier and can presumably fight through a block to help make the tackle.

ABOVE: Oops.  MIKE Brandon Herron tackles like a middle schooler.  WILL Brandin Hawthorne (?) lies prone on the ground from just being in the general vicinity of football player-sized football players.  Meanwhile, FS Marvin Robinson has completely overrun the play and lost his leverage on the ballcarrier.  And because of his careless positioning, he flummoxes SS Josh Furman, who has finally stepped up to support only to be thwarted by a teammate.  RB Michael Cox sees the cutback and engages afterburners. 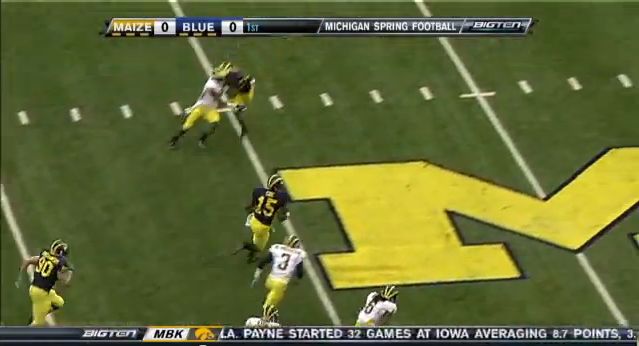 ABOVE: WR Martavious Odoms (?) has good position on CB Greg Brown (?) and walls him off.  As RB Michael Cox hits the 45-yard line, he’s a half step in front of FS Marvin Robinson and a half step behind SS Josh Furman.  Speed has always been a question for Robinson, but Furman is a supposed burner who ran a supposed 4.37 in high school. 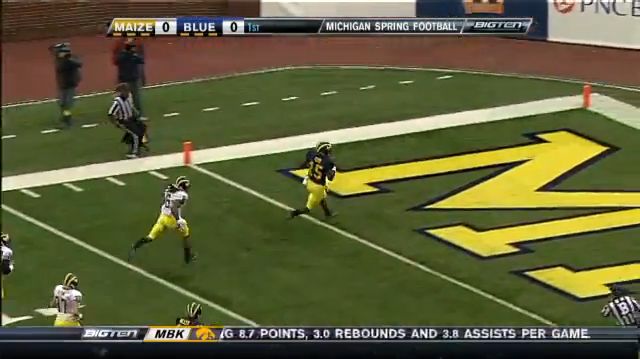 ABOVE: As RB Michael Cox crosses the goal line with a 68-yard touchdown run, FS Marvin Robinson has gone from half a yard behind Cox to about 9 yards.  SS Josh Furman has lost about 4 yards on Cox.  Of course, both were chasing Cox at an angle as he veered toward the left sideline, but neither ever seemed in danger of catching Cox once he turned on the jets.

WHAT HAVE WE LEARNED?

Fast forward to :56 to see the above play: