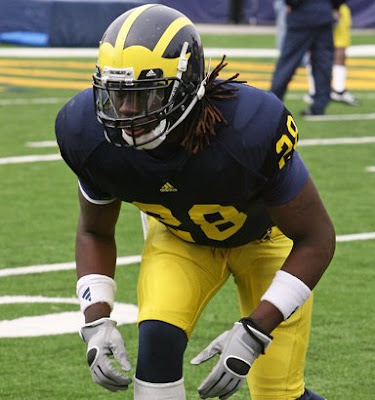 According to reports from spring practice, it looks like the roster will be shaken up some.
Rumors are swirling that junior wide receiver Toney Clemons will no longer be playing for the Wolverines. This has been a rumor for a while, but he has been absent from practices, so the writing appears to be on the wall.
Redshirt freshman Patrick Omameh is running with the first team offensive line, and it looks like the odd man out could be redshirt junior John Ferrara. Redshirt junior Steve Schilling has moved to left guard to take Ferrara’s spot, and Omameh has been plugged in at right tackle. The rest of the offensive line will likely remain the same.
Sophomore Justin Feagin, redshirt freshman Terrence Robinson, and senior Carlos Brown have all been practicing throwing the ball. None of them is being looked at as a possible quarterback; they are simply in the mix for occasional direct snaps.
The competition at running back seems to be working wonders. Reports are that all the available running backs (Michael Shaw is injured) look good and are running the ball well, and that includes true freshman Vincent Smith.
Sophomore J.B. Fitzgerald is battling Kenny Demens for the open linebacker job, but it looks like Fitzgerald has a leg up in that fight. The other linebacker who earned a starting nod last year, Marell Evans, is playing the hybrid DE/OLB position, along with Brandon Herron, Steve Watson, and Anthony Lalota.
The coaches are giving redshirt freshman Brandon Smith every opportunity to win the starting strong safety job. It looks like redshirt sophomore Michael Williams will be the starter at free safety. It’s yet to be determined what role senior Steve Brown will play, but it looks like his role will change. He’ll be playing closer to the line of scrimmage if Smith can prove himself worthy of the starting job.
This quite possibly means nothing, but one picture I saw showed Kevin Grady as the long snapper.