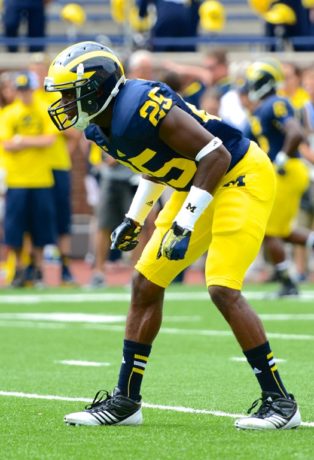 Projected starters: Senior Delano Hill started eight games this past season, making 46 tackles, 2.5 TFLs, and 2 pass breakups. He is a decent tackler when stepping up to support the run, but he has yet to make much of an impact in the passing game and does not flash great speed. He is the odds-on favorite to be Michigan’s strong safety. At free safety, fellow senior Dymonte Thomas has the inside track after starting four games, making 24 tackles, and breaking up 7 passes. He has better speed and makes more plays against the pass, but he is not quite so stout against the run.

Hit the jump for more on the safety position.

Departures: Steady but unspectacular safety Jarrod Wilson leaves Michigan after playing significant time throughout his career and starting 31 games. Last season he made 61 tackles, 1 sack, 2 INTs, and 3 pass breakups. Stanford defensive back Wayne Lyons transferred to Michigan for his final year but played sparingly. He made just 6 tackles and 1 pass breakup.

Backup battle: Sophomore Tyree Kinnel burned his redshirt in order to play eight games on special teams last season, though he did not record any statistics. He needs to be groomed for a starting role in 2017. I have heard positive things about redshirt freshman walk-on Jordan Glasgow, and with limited numbers at safety, he is in the conversation for playing time. Also, A.J. Pearson is a fifth-year senior on the spring roster and could be in line for some snaps; he has played in seven games over the past two seasons and made 2 tackles in that time.

#1 thing to watch: Who is the future at safety? The starters will both be seniors. Redshirt sophomore Jabrill Peppers – whom I covered in the linebackers post – would certainly be able to play safety, but he’s a very possible risk to leave for the NFL after the upcoming season. Some help will arrive in the fall, but not in great numbers. safety has to be a huge recruiting priority in the 2017 class, but Michigan needs walk-ons and/or youngsters to show they’re able to step on the field in some capacity this fall. Hill and Thomas can’t play every snap.