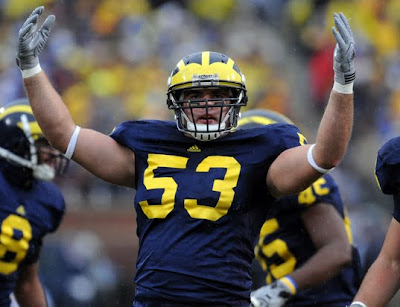 MGoBlog and The Wolverine have done a good job of breaking down the spring roster, so I won’t waste your time or mine in parsing the roster much further.

There are a few noteworthy bits from today’s press conference and the roster that I would like to highlight, however.

– It seems apparent that the rumor we heard about the offensive and defensive lines is true: Rodriguez wants them to be bigger than they have been for the past two seasons. There’s really no other way to explain the fact that there are now five (5!) offensive linemen over 300 lbs. when last year’s only 300 pounder was freshman Quinton Washington. With almost six months left until the season, a couple other guys might get there before September, too.

– Tight ends Kevin Koger (251), Martell Webb (257), and Brandon Moore (260) are all getting in the “hefty” range for tight ends. There were a lot of people who thought Rodriguez was moving toward using tight ends heavily. This is significant evidence to the contrary. These guys seem to be blocking tight ends in the making.

– Ryan Van Bergen and Steve Watson are both listed as defensive ends. Van Bergen was a DT last year, and Watson was the third-string Quick end behind Craig Roh and Brandon Herron. Watson is likely to ride the bench once again, but as I expected, Van Bergen seems to be Brandon Graham’s replacement at DE.

– Junior Hemingway is 227 lbs. That’s too heavy for a receiver who wasn’t that fast to begin with. If he continues to play at 220+ pounds, he won’t be any kind of deep threat. This bodes unwell for Michigan’s downfield passing game.