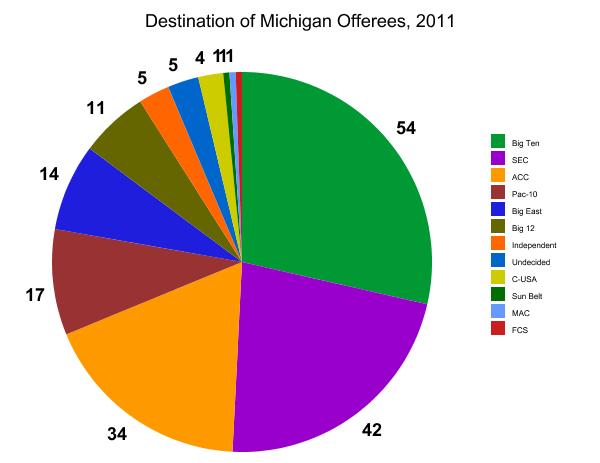 If you tally the offers above, Michigan handed out 189 offers to high school recruits for the Class of 2011.  These offers were reported by recruiting sites (Rivals, Scout) or news sources (such as local newspapers).  Surely 189 isn’t the exact number of offers sent out, because some kids probably never bothered reporting their Michigan offers and some kids probably exaggerated on their recruiting profiles.  But this represents all offers that were made available to my attention, both from Rich Rodriguez and new head coach Brady Hoke.

Although Michigan can receive National Letters of Intent until April 1, it seems that the class has been capped at 20 recruits.  So some quick math tells us that 10.6% of recruits who were tendered scholarship offers from Michigan actually accepted that offer (compared to 14.2% last year).  Combining those 20 recruits with the 34 who pledged to other Big Ten schools (including Nebraska), a total of 54 offerees chose the Big Ten.

The twelve-team SEC was actually Michigan’s biggest competition, accepting commitments from 42 players who were offered by the Maize and Blue.  The ACC reeled in the same number as the rest of the Big Ten: 34.

Jumping down the list, five recruits remain undecided or might be headed to junior college: Jadeveon Clowney, Shawn Conway, Taques Franklin, Prince Holloway, and Dexter Staley.  As #1 recruits are wont to do in recent years (Terrelle Pryor in 2008, Bryce Brown in 2009, Seantrel Henderson in 2010, etc.), this year’s consensus #1 recruit, Jadeveon Clowney, has yet to make a decision.  He will likely choose an SEC school (probably South Carolina), further cementing the SEC as Michigan’s prime competition for recruits.

One player, kicker Connor Loftus from California, chose to attend the University of Pennsylvania, an FCS school.

Interestingly, this is the exact same order that appeared during the 2010 recruiting cycle (NOTE: last year’s chart did not include Michigan commitments in the Big Ten’s total).  The 2010 class even featured the Big Ten garnering 54 Michigan offerees, an exact replica of the 2011 class.  That’s flippin’ weird.  Anyway, the Big Ten was then followed by the SEC, then the ACC, Pac-10, Big East, Big 12, etc.