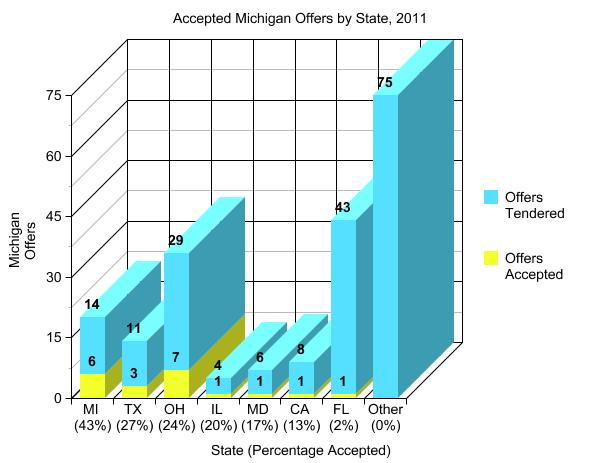 Last year I became curious about how successful Michigan was at recruiting each state.  That curiosity has spilled over to the 2011 class, and the chart above shows the percentages of successfully recruited players from each state.  This is all based upon offers recorded on the 2011 Offer Board located at the top of the page.  I can’t promise that it’s 100% accurate, because sometimes reporting of offers is a little bit iffy.  But it’s the best I could do.

It should also be pointed out that Brady Hoke’s late hiring as Michigan’s coach somewhat skews the numbers.  Players who decommitted (Jake Fisher from Michigan; Matt Goudis from California; Kevin Sousa and Dallas Crawford from Florida) would have changed the numbers slightly.

As might be expected, Michigan was the most successfully recruited state.  Nearly 50% of in-state offers were accepted; the decommitment of Fisher was the only thing standing in the way.

Texas was a bit of a surprise.  Michigan pulled in three commitments from Texas – a heavily talented state – while only giving out eleven offers.  But it’s a bit curious that Michigan’s coaches didn’t pursue more players in the state.  Running backs coach Fred Jackson has some contacts in Texas, and even though several Rich Rodriguez assistants had connections in Florida (where Michigan tossed out 43 offers), the success rate in Florida over the past couple years has been abysmal.  Michigan went 3-for-46 (7%) in Florida last year, and that number looks like an unbridled success when compared to the 1-for-43 showing this year (2%).

After crunching the numbers for two consecutive seasons, it seems that Michigan’s coaches probably wasted quite a bit of time recruiting the Sunshine State.  Maybe it was a risk-reward thing with Rodriguez (after all, Denard Robinson is from Florida), but a batting average of .020 is horrible, no matter how you slice it.  When you hand out 190 offers, you probably spend quite a bit of time talking to kids or the coaches of kids who have very little chance of attending your university.  Perhaps Rich Rodriguez and Co. would have benefitted from making more intimate connections with fewer kids rather than, as one commenter said, “carpet bombing” the country with offers.

Ohio was once again recruited with some success (37% in 2010; 24% in 2011), and Hoke will surely continue to work hard in the state.  Even though Rodriguez got a large number of 2010 recruits from Ohio, he didn’t seem to hit the state very hard in his last season.  The percentage of accepted offers jumped significantly once Hoke was hired.  He reeled in four recruits in approximately three weeks on the job, including the likes of Tamani Carter, Antonio Poole, Keith Heitzman, and Frank Clark.  Prior to his arrival, Rodriguez had accepted only three commitments from Ohioans – Greg Brown, Jack Miller, and Chris Rock.

Altogether, Michigan offered players from 27 different states.  The Wolverines struck out in twenty of them, including: