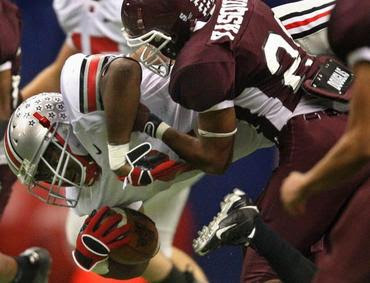 At Michigan’s spring game this past weekend, running back Stephen Hopkins, from Flower Mound, TX, committed to the Wolverines. Hopkins is a 6’0″, 220 lb. bruiser whose high school team dresses itself in the silly looking uniform above. (No, that’s not Ohio State vs. Texas A&M.)

Hopkins ran 343 times for 1,663 yards and 16 TDs as a sophomore. In 2008 he ran for slightly more yards (1,689) and more TDs (22) on seventy fewer carries (273 for the math-deficient). Apparently his coach thinks he’s Jamal Anderson, which is bad for Michigan, because Jamal Anderson came up with annoying dances and then snorted cocaine off of a toilet.

Hopkins reminds me a little of Chris Perry, who’s now riding the bench in the NFL. I was never a big fan of Perry when he was at Michigan. He was a serviceable back, but I didn’t think he ran hard until his senior year. I’m not comparing their effort levels, but I see some similarities: they both run upright, neither one has gamebreaking speed, they’re both downhill runners, and I don’t see Hopkins having an immediate impact.
He is a big back and, if nothing more, he will likely develop into a short yardage back or fullback. Michael Cox is also a big back and will have three years of eligibility remaining once Hopkins gets on campus, so I’d expect a redshirt.