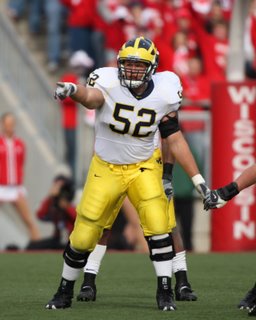 HIGH SCHOOL
Schilling was a 5-star recruit to both Rivals and Scout and the equivalent of a 4-star player (the #106 overall player) to ESPN.  He played offensive tackle in a Wing-T offense at Bellevue High School in the state of Washington, but Rivals ranked him as the #2 offensive guard in the country.  I had just started paying attention to recruiting in the summer of 2006 (which was a few months after National Signing Day), but looking back at his high school film, it seems obvious that Schilling should have been headed for the guard position.

COLLEGE
Schilling had illness (mononucleosis) and injury (shoulder) problems in 2006 and did not play as a freshman.  Most freshman linemen redshirt – although classmate Justin Boren played a little bit – but Schilling missed a lot of time that he could have spent conditioning and lifting.  He was essentially a true freshman in 2007, but started most of the season at right tackle, anyway.  It was a bit of a revolving door on the right side of the line that season, when five players made starts at right guard and two made starts at right tackle.  Schilling himself moved inside to right guard when projected starter Alex Mitchell was injured and/or disappeared.  (It’s rumored that Mitchell actually quit the team, but was talked into rejoining the squad to bolster the offensive line later in the season.)  Schilling was overpowered repeatedly, especially against Ohio State.  He remained at right tackle through the abysmal 2008 season when the entire offensive line struggled to adjust to Rich Rodriguez’s new blocking schemes.  By the time Schilling became a redshirt junior in 2009, the coaching staff had moved him to left guard, where he started all twelve games.  He looked much more comfortable inside and earned All-Big Ten honorable mention.  That led into a 2010 in which a Schilling-led offensive line paved the way for 3,101 rushing yards and 35 rushing touchdowns.  Michigan’s quarterbacks were sacked only 11 times on the year.  Schilling started all 13 games and grew into a very good zone-blocking offensive guard by the end of his career.

SUMMARY
I feel a little bit sorry for Schilling, although I probably shouldn’t feel too sorry for a four-year starter at Michigan who will at least get a shot at an NFL career.  He was pressed into action way too early – at a position that didn’t maximize his talents – and I think his development was stunted because of that.  The kid spent three years (well, more like two) playing tackle because it fit the team’s needs, and that’s admirable.  But it was pretty clear early in his career that he had a better future at guard.  He didn’t have the foot speed and balance to play tackle, and his burly body screams “offensive guard.”  I’m not sure that there was necessarily a better option, because other potential tackles were Mark Ortmann, Perry Dorrestein, and Mark Huyge, all of whom were also quite young in 2007 and 2008.  Coaches Lloyd Carr and Rich Rodriguez were probably doing the best they could with the talent available, but it’s a bit of an indictment of Carr’s recruiting that so few options were available.  Anyway, Schilling moved inside as a redshirt junior, and things improved significantly afterward.  He wasn’t a bone-crushing mauler, but I saw successful runs behind the left guard and, as a senior, I saw Schilling latching onto inside linebackers more frequently.  While not a superstar, Schilling is an overall success story for Lloyd Carr, Rich Rodriguez, and Rodriguez’s offensive line coach Greg Frey.

PROJECTION
Schilling has been projected in various spots for the NFL Draft coming up in late April.  He’s generally considered to be one of the top ten offensive guards for the 2011 draft class.  Despite playing tackle for a few years, he doesn’t seem to have much position flexibility.  At 6’4 1/8″, his arm length is only a reported 32.75″, which is two to four inches shorter than most tackles in the draft.  He will probably need to add some weight to his 308 lb. frame unless he ends up with a zone blocking squad.  But overall, Schilling could have a solid future as an NFL offensive lineman.  He should be drafted in the middle rounds (3rd to 5th), and I could see him having a decade-long career as a solid backup or nondescript starter.