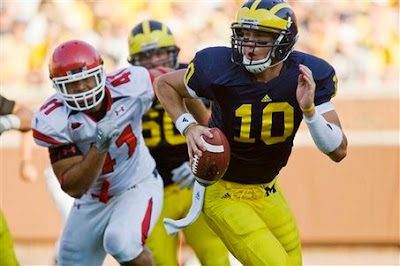 Quarterback Steve Threet has decided to transfer from Michigan. He released a statement saying that he has received his release from the team and he will be looking to play football elsewhere.

Coming out of high school in 2007 as the #9 pro-style quarterback in the nation, he went to Georgia Tech. It’s still unclear why he didn’t continue his career as a Yellowjacket, but he transferred to Michigan after winter semester, supposedly to be the heir of the heir of Chad Henne. And that’s exactly what he was. Henne graduated after the 2007 season and Ryan Mallett was anointed the starter…until Mallett decided to transfer to Arkansas. Suddenly, a team that had four 4- and 5-star quarterbacks on its roster in summer 2007 (Henne, Mallett, Threet, and Jason Forcier, who transferred to Stanford) was down to one.

For a guy who was expected by most people to start the 2009 season at the top of the depth chart, this is a curious move. Admittedly, Threet did not fit the popular mold of Rich Rodriguez run-good-throw-bad quarterbacks. Still, for a 6’5″, 230 lb. quarterback, Threet moved well. His decision-making was suspect, but after all, he was a redshirt freshman in 2008. Even a read-option-bred kid would have had a difficult time in the Big Ten as a youngster.

The rumor is that Threet will end up at North Dakota State. I feel bad for Threet in a way, because this is not the way he saw his dream unfolding. At the same time, his notion of commitment is suspect. If he does indeed attend North Dakota State, that will be his third school in three years. I never heard a bad thing about the kid’s attitude while he was at Michigan, other than that he was having a hard time picking up the offense. He’s a hard worker, and he’s been through a lot. Hopefully he’ll be successful at North Dakota State and be the second coming of Matt Gutierrez.