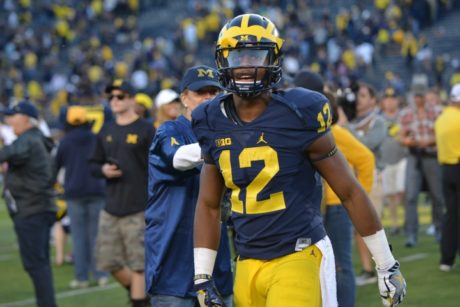 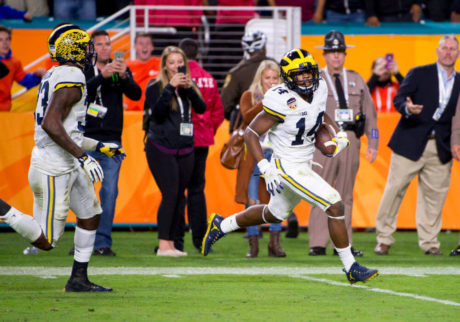 Metellus may have been the biggest surprise of the 2016 class. Lightly recruited and generally ignored by the recruiting services until he became a Michigan commit, many people saw Metellus as a throw-in offer with high school teammate Devin Bush, Jr. ESPN thought highly of him, but that was about it. He wasn’t much of a factor until the Rutgers game, when he led the team in tackles with 6. At the time it didn’t seem like a huge deal, since Michigan crushed the Scarlet Knights by a score of 78-0 and Metellus did all his work when the game was well in hand. He wasn’t a major factor again until Jabrill Peppers pulled his hamstring prior to the bowl game. Suddenly, Michigan didn’t have its superstar Heisman candidate at Viper, and Metellus stepped in. He made another 6 tackles and returned a blocked extra point for a 2-point conversion – something Peppers had done against MSU earlier in the year – but there were still some glitches in his game.

This spring the coaching staff moved Metellus back to safety, since Khaleke Hudson locked down the Viper position. It’s a good thing, too, because Michigan needs safeties. Both starters (Dymonte Thomas, Delano Hill) graduated, and Peppers is gone, too. In effect, Michigan lost its top three safeties and top three cornerbacks to the NFL. Now it’s up to Metellus and junior Tyree Kinnel to hold down the back end, with freshmen and redshirt sophomore walk-on Jordan Glasgow as backups. I have a thought to put Metellus higher because of the dearth of options, but to be honest, we still don’t know what we have with Metellus. He struggled a bit against FSU at Viper, and now he’ll be in even more space at strong safety. I think Don Brown and Brian Smith will have those guys ready to go, but I can’t convince myself to move up Metellus. 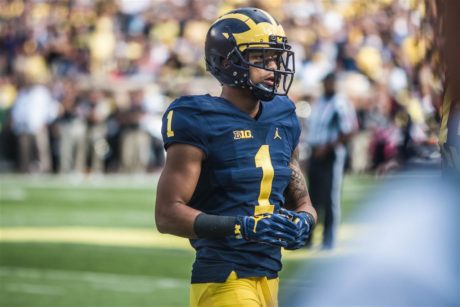 Normally, I probably would have projected someone with Crawford’s skills as a guy destined for a redshirt, or possibly with just a wee bit of playing time with no discernible freshman upside. Last year I ranked him pretty highly. Why the swing? The kid likes to block. Crawford is the best blocking receiver I’ve seen come to Michigan in a while, even though a couple other guys (Jehu Chesson, Maurice Ways) have developed those skills in college. I think that trait got Crawford on the field early, and he had a decent freshman season for someone playing behind two established seniors in Chesson and Amara Darboh. Crawford also has good hands and made a nice touchdown catch against Maryland.

Now Crawford might be the #1 receiving target in 2017. With Chesson and Darboh gone – and Drake Harris moved to cornerback – the only upperclassman receivers are redshirt junior backup Ways and junior Grant Perry, neither of whom has been a heavily utilized receiver. Since the spring, the expectation has been that Crawford would start at one receiver spot this year, with a freshman (likely Tarik Black or Donovan Peoples-Jones) starting on the other side. Crawford doesn’t have the same athletic upside as those two freshmen, but he does have those soft hands and that blocking ability, and he runs like a running back. 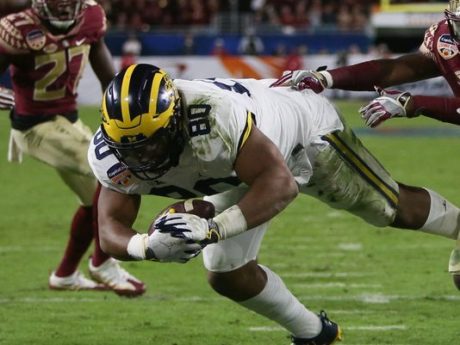 Hill entered college as a bit of a tweener. Was he a tight end or . . . a guy who didn’t really fit a spot? When he committed as a part of the class of 2013, Michigan was in the midst of using bigger tight ends and “U-backs,” but the U-back position was filled by different body types and skill sets than what Hill possessed. Hill didn’t play much during the Hoke era, and he appeared to be buried on the depth chart. Then Jim Harbaugh arrived, and he found a role for Hill in 2015 as an H-back. A void opened after the graduation of Joe Kerridge, though, and Harbaugh had the idea of moving the 6’2″ Hill to fullback. I was initially skeptical because Hill hadn’t taken handoffs before and seemed a little tall for the position, but it worked out better than any could have predicted. Hill led Michigan in scoring in 2016, scoring 10 rushing touchdowns and 13 total touchdowns. He even earned a (self-given) nickname, the “Hammering Panda.”

Despite the Hammering Panda not starting a single game in 2016, he seems more valuable than fellow fifth year senior Henry Poggi. Poggi started more games, but he’s not as athletic or skilled. Hill was a short-yardage and goal line demon, and he was especially good as a lead blocker on toss sweeps. That role should continue, even with the addition of scholarship fullback Ben Mason to the roster. Hill has soft hands and has become trusted by quarterback Wilton Speight. The unknown Mason notwithstanding, I think there would be a big void if Hill were to go down, because he can fill a role as a lead fullback, short yardage runner, pass catcher out of the backfield, and H-back. It’s hard to project him beating last year’s 13 touchdown performance, but teams knew he was going to get the ball on the goal line last year, and they still couldn’t stop it. 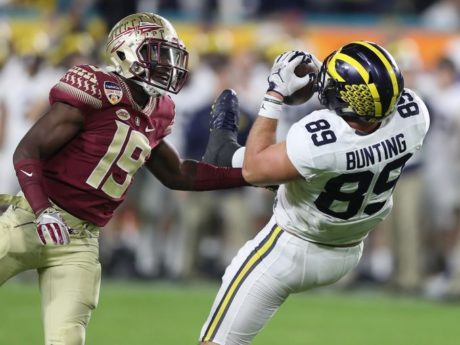 Entering the 2016 season, the starting tight end position was solidified with senior Jake Butt, who would go on to win the Mackey Award. Bunting was never going to be more than a backup, and with a bunch of young options, his value as an alternate option waned a little bit, too. Michigan had Devin Asiasi, Tyrone Wheatley, Jr., and others to help out, and they did. The vast majority of tight end targets went to Butt (46 catches), and Bunting notched the second-most catches with 5 total; four other backups totaled 7 receptions. Bunting was relatively forgotten until Butt tore his ACL in the bowl game, and suddenly there was this unknown, athletic, 6’7″ kid catching 3 passes for 40 yards.

The heir apparent is Bunting. Athletically, he’s the most similar to Butt, and he even has the so-so blocking skills to seal the comparison. It doesn’t hurt that Asiasi transferred to UCLA in the off-season, further clearing a path to the starting gig. From a talent standpoint, I think Bunting is capable of matching Butt’s production, but I don’t believe the depth chart and play calling will allow it. I expect to see a few more wide receivers on the field, and I don’t believe the top three 2017 pass-catchers will get as large of a percentage as the 2016 triumvirate (Butt, Jehu Chesson, and Amara Darboh). This should be a solid year for Bunting, but not a huge breakout star.