A new article from the Detroit Free Press outlines why Justin Feagin was booted from the Michigan football team recently. Not only was Feagin a troubled kid in high school, but he apparently continued to make shady dealings during his freshman year of college.

I commend Rodriguez for booting Feagin from the team, although any coach would probably do the same. But I remain skeptical of Rodriguez’s desire for a clean program. I was not a fan of his program when he was at West Virginia, and I can’t say that I’m happy with the current direction of Michigan’s program. I think the Wolverines will do well on the field during Rodriguez’s tenure, but I don’t want Ann Arbor to be the Coral Gables of the North.

I’m willing to give Rodriguez a bit of a reprieve for Feagin. Rodriguez needed a mobile quarterback and only had one and a half months to find one. His choices were seemingly limited to Feagin and a kid named B.J. Daniels, who also has troubling circumstances. Without much time to find his ideal quarterback, perhaps Rodriguez and his coaches didn’t do a thorough background check on Feagin. Still, anything that happens within this program deserves to be credited to or blamed on Rodriguez. This is no longer “Lloyd Carr’s leftovers.” This is Rodriguez’s team. Hopefully, he won’t make that mistake again. 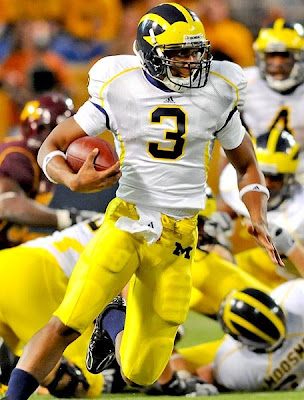 Michigan quarterback/slot receiver Justin Feagin has been dismissed from the program, according to a statement released by Rich Rodriguez. The statement gave no indication of the reason for the dismissal, merely stating that it was a “violation of team rules.” Rumors are circulating that it’s a particular action, not a “he kept falling asleep in team meetings” sort of thing. I won’t speculate any further until those rumors turn into actual reports.
Anyway, Feagin was a late addition to the 2008 recruiting class, jumping on board only after Rodriguez took the helm. He needed a dual-threat quarterback, and Feagin wanted a shot to play quarterback instead of playing defensive back at a place like Miami. During the disastrous 2008 season, Feagin played sparingly at quarterback in relief of Nick Sheridan and Steve Threet, never being allowed to throw a pass. It boggled my mind that Rodriguez wouldn’t allow Feagin to throw the ball even once when Michigan was down against Ohio State, but it happened. Feagin made a seemingly permanent move to slot receiver once Tate Forcier and Denard Robinson hopped on board in the 2009 class, but he was almost surely destined for riding the bench behind Martavious Odoms, Terrence Robinson, and perhaps others.
Moving forward, Feagin is at least the twelfth player to be dismissed or transfer since Rodriguez’s arrival. Mallett, Boren, Hill, Babb, Chambers, McGuffie, Horn, Clemons, O’Neill, Wermers, and Threet are the others; Marcus Witherspoon enrolled at Rutgers, but technically, I don’t know that he was ever admitted to Michigan. Ten of those departures have occurred since the beginning of the 2008 season. I’m sure that frequency will dwindle, but as I’m sure we all know, a team can’t survive with 10 players leaving every year and a maximum of 25 incoming players per year. Something has to give.
Uncategorized 2 comments admin

According to the Kalamazoo Gazette, former Michigan tackle Dann O’Neill will be playing for the Western Michigan Broncos. He has an older brother there who plays tight end. I would assume that O’Neill is their most highly regarded recruit in the short history of regarding recruits, but I don’t care enough about WMU to research the topic.

Also, this makes Anonymous in the comments section either a liar or a jokester or just plain gullible.

Of players who were on Michigan’s roster last season, there’s a long list of departures:

I’m sure much of the attrition has been due to the new regime. But no matter how you slice it, you can’t lose nine players early and field a team with any sort of depth. (I’m not counting Andre Criswell and Carson Butler, since they played for four years.) 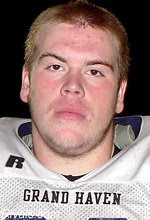 A random poster on MGoBlog reported that Dann O’Neill has quit football; Brian from MGoBlog basically verified the original poster’s story, so it looks likely that O’Neill will no longer be a Michigan Wolverine football player. This is currently just a strong rumor and has not been officially announced by Rich Rodriguez.
Coming out of Grand Haven, MI, in 2008, Rivals ranked O’Neill the #49 player and #10 offensive tackle in the country. He was listed at 6’8″ and 291 lbs. and looked like Michigan’s next monstrosity of a tackle.
Then along came Rodriguez. Rumors from practices suggested that O’Neill had a lot of refining to do to his technique and wasn’t improving as quickly as many would have expected. Current rumors swirl that he just lacks a passion for the game; I don’t know the validity of the rumor, but if you look at his pictures, he always looks sad. Not mean like I’m-going-to-eat-your-children-Mr.-Defensive-End. Not happy like I’m-going-to-eat-your-children-Mr.-Defensive-End-and-yum-they-will-be-tasty. Just perpetually sad like Jake Gyllenhaal.
Nowhere have I ever read a report that O’Neill was challenging for playing time. The tackles vying for time have always been Mark Ortmann, Perry Dorrestein, Patrick Omameh, Ricky Barnum, and Mark Huyge. Considering that Omameh and Barnum are both in the same graduating class as O’Neill, perhaps O’Neill didn’t think he would get a fair shake. Regardless, if Barnum and Omameh both stick around, it’s quite possible that O’Neill would have remained a depth player.
That being said, offensive line depth now becomes an issue again. Michigan’s offensive line was thin last year, but we pulled in three good offensive linemen (Taylor Lewan, Quinton Washington, and Michael Schofield) to add to the six signees from the class of 2008. With Kurt Wermers and apparently O’Neill washing out so soon in their careers, the net gain from the 2009 class is essentially only +1. O’Neill’s departure would leave us with twelve returning scholarship players to go with the three 2009 recruits, giving us a total of 15. Perhaps Barnum is more likely to stay outside at tackle now, which might necessitate further recruiting of interior linemen in the class of 2010.
Potential depth chart for 2009:
LT – Ortmann (5th), Dorrestein (RS Jr.), Lewan (Fr.)
LG – Schilling (RS Jr.), Barnum (RS Fr.), Washington (Fr.)
C – Molk (RS So.), Khoury (RS Fr.), Mealer (RS Fr.)
RG – Moosman (5th), Ferrara (RS Jr.), McAvoy (5th)
RT – Huyge (RS So.), Omameh (RS Fr.), Schofield (Fr.)
(Picture via Rivals.com)
Page 19 of 19« First«...10...1516171819