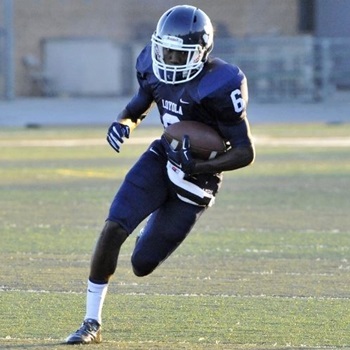 Consider doing some shopping at Amazon to help out the blog (LINK).

ADDED TO THE BOARD: 2016
Los Angeles (CA) Loyola cornerback David Long, Jr. decommitted from Stanford. Long is a 6’0″, 175 lb. prospect with offers from Notre Dame, Oklahoma, UCLA, USC, and Washington, among others. He’s a 247 Composite 4-star, the #7 cornerback, and #65 overall. Long took an official visit to Michigan for the Michigan State game in October, and he has an official visit scheduled to Washington for mid-January; those are his top two schools. Michigan has been recruiting Long hard for the entire recruiting cycle, telling him that he’s their #1 target at the cornerback position. They have also told him that they want to use him like Jabrill Peppers, as a defensive back, receiver, and special teams player.

Hit the jump for some guys who went off the board and some random bits.

END_OF_DOCUMENT_TOKEN_TO_BE_REPLACED

Farmington (MI) Farmington linebacker David Reese decommitted from Michigan on Wednesday night. He had committed to Michigan on the day of the spring game back in April (LINK).

Anyone with a finger on the pulse of Reese’s recruitment saw this moment coming months ago. Reese originally committed with Michigan’s understanding that he would get his first shot to play fullback, but that he would also be looked at as a linebacker. As more offers for linebacker started to come through, Reese started to reconsider and wanted assurances from Michigan that he could be a linebacker through and through. Meanwhile, he was also looking to enroll early. Michigan informed Reese that he could play linebacker, but that they were keeping early enrollee spots open for other prospects. In other words, they said that if he wanted to play for Michigan, he would have to wait until next summer to enroll.

Hit the jump for more on Reese, as well as some analysis of the linebacker recruiting situation.

END_OF_DOCUMENT_TOKEN_TO_BE_REPLACED

Kingston Davis – RB – Prattville (AL) Prattville: Davis committed to Michigan in April (LINK). So far as a senior, he has 598 yards and 7 rushing touchdowns through four games (LINK).

Chris Evans – RB – Indianapolis (IN) Ben Davis: Evans committed to Michigan in June. You can see how his senior season is going here (LINK).

Rashan Gary – DT – Paramus (NJ) Catholic: Gary is a 6’4″, 287 lb. prospect with offers from almost everywhere. He’s a 247 Composite 5-star, the #1 defensive tackle, and #1 overall. The plurality of his Crystal Ball picks are for Michigan (47%), but Auburn and Georgia are also strong contenders. He is teammates with 2016 wide receiver Donald Stewart; 2017 defensive end Corey Bolds and linebacker Drew Singleton; and 2018 quarterback Allan Walters. There are a lot of connections to Michigan, since redshirt freshman safety Jabrill Peppers and offensive lineman Juwann Bushell-Beatty are both from his high school, along with recruiting coordinator Chris Partridge, who coached the Paladins last year. This is Gary’s official visit.

END_OF_DOCUMENT_TOKEN_TO_BE_REPLACED

Keyshon Camp – DT – Lakeland (FL) Lake Gibson: Camp is a 6’3″, 269 lb. prospect with offers from Alabama, Florida, Miami, Michigan, Oregon, and UCLA, among others; he committed to USC in June. He’s a 247 Composite 4-star, the #20 defensive tackle, and #174 overall. A former teammate of Michigan freshman Reuben Jones, he is also coached by former Michigan offensive lineman Ricky Barnum. This is his official visit.

Caleb Kelly – LB – Fresno (CA) Clovis West: Kelly is a 247 Composite 5-star, the #2 outside linebacker, and #16 overall. He has offers from Alabama, Michigan, Notre Dame, Oklahoma, Oregon, UCLA, and USC, among others. He visited Michigan this spring and the coaching staff has been after him hard, but his leader is thought to be Oklahoma. He is committed to the 2016 U.S. All-American Bowl. This is his official visit.

Hit the jump for a number of other visitors.
END_OF_DOCUMENT_TOKEN_TO_BE_REPLACED