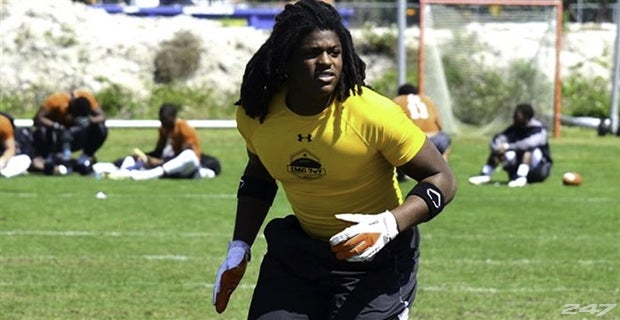 Hit the jump for the rest of the commitment post.

Bush was offered by the Michigan staff on National Signing Day 2015. He took a spring visit to Michigan, returned over the summer, and came to a game this fall, all on his own dime. For much of his recruitment, he was considered to be a Florida State lean; after all, his father/head coach played at Florida State and went on to a decent NFL career playing safety and special teams with the Atlanta Falcons, St. Louis Rams, and Cleveland Browns. There are conflicting reports about whether Bush the Younger silently committed to Michigan during his June visit to Ann Arbor, but silent commitments mean very little. Regardless, he was high on the Wolverines, who consistently placed him on a pedestal as one of their top targets in the 2016 class. The initial recruiting charge was led by then-defensive coordinator D.J. Durkin, who had ties from his years as Florida’s defensive coordinator. After Durkin left for Maryland, head coach Jim Harbaugh and newly appointed linebackers coach Chris Partridge kept up the pressure.

Bush is a very physical player, despite his size. In some ways, he is a lot like Michigan senior James Ross III – undersized but packing a wallop. Bush uses his hands very well to disengage from blockers, and he has the leverage to shed linemen and lead blockers. When he gets to the ball carrier, he comes full speed and runs through the tackle (a trait that separates him from an otherwise similar player in Orlando Oak Ridge’s Jonathan Jones). He takes good angles to runners, plays downhill, and is tough to shake in space because of his short-area quickness and agility. Bush also shows some nuance in his ability to rush the passer, whether blitzing off the edge or on the interior of the line.

His highlights do not show much in the way of pass coverage, which makes me think he has some work to do in this area. While he has the quickness and agility to do well, he may need to work on his awareness and reads. Bush does not have great size, so he will have to continue to use superior technique and anticipation to beat blockers and runners.

Overall, the thing that stands out to me most about Bush is that he is a weapon to counter spread offenses. People – including me – have been complaining that Michigan doesn’t have the athletic linebackers to play in space against teams like Ohio State, Oregon, etc. Well, Bush is that guy, at least in theory. He is physical enough to hold up on the interior of a defense, but also quick enough to chase runners to the sideline. We’re not looking at a clone of Desmond Morgan or Joe Bolden. The first guy that popped into my mind is former Ohio State linebacker Brian Rolle, though I do not think Bush has the same flat-out speed that Rolle had; Rolle played at 5’11”, 218 lbs. and ran a 4.53 when preparing for the NFL Draft.

The exciting thing for Michigan fans is that the Wolverines may have picked up a starting inside linebacker for 2016. Not, like, in the 2016 class, but for the 2016 season. Bush will enroll early in January after playing in the Under Armour All-American Game, so he will participate in Michigan’s spring practices. With four senior linebackers graduating after the Citrus Bowl, the only player basically guaranteed to earn a starting position is senior Ben Gedeon at one of the inside spots. Michigan will likely be bringing in a 3-4 defensive coordinator to run a similar scheme to last year’s, and Bush could very well have the inside track over some uninspiring players from past classes.

As for connections to Flanagan High School, this next year or so could continue to be very interesting. Bush joins 2016 teammates Josh Metellus and Devin Gil in committing to the Wolverines. Meanwhile, there have been unconfirmed rumors floating about that Devin Bush, Sr. could join Michigan’s staff in a recruiting capacity similar to that of Partridge. On top of that, Michigan has offered 2017 cornerback Stanford Samuels III and wide receiver Clevan Thomas from Flanagan, so this may not be the end of the “pipeline” to Michigan.