What’s Harbaugh’s worst loss at Michigan? Michigan State lost 49-7 to Iowa, so was that it last week? Or was it getting wiped off the field by a team you hadn’t lost to since 1987? The Hoosiers are a better program right now than the Spartans, so there’s less shame in a competitive sense. But still, even Rich Rodriguez (2-0) and Brady Hoke (2-0) managed not to lose to Indiana.

It’s 2020 and nobody knows anything, so here are my wild guesses for what we’ll see this year.

LEADING RUSHER
Zach Charbonnet led the team in rushing as a true freshman last year with 729 yards. I do think Chris Evans will steal some of his carry share from last year, with Hassan Haskins and Blake Corum lurking, but Charbonnet should get the plurality of the opportunities.
Prediction: Zach Charbonnet, 498 yards

Hit the jump for the rest of the prognostications.

Hill was the best safety in the 2019 class, and expectations were sky-high for him as a freshman. Safety is a tough spot to play for any first-year player, so Michigan worked him in slowly. They had that luxury because the team had senior Josh Metellus and junior Brad Hawkins at safety, plus senior Lavert Hill and junior Ambry Thomas at cornerback.

Hill showed flashes of stardom as a freshman. In week two he caught a 25-yard pass from Michael Barrett on a fake punt against Army. He made a diving interception at Indiana. He made 8 tackles and 1.5 tackles for loss in the bowl game against Alabama. (Also noteworthy: he got burned for a touchdown on the first play by Jerry Jeudy.)

Now Jim Harbaugh is saying things like “Hill is the most talented athlete on the team.” Don Brown is saying that safety Hill “is the best cover guy on the team.” Word on the street is that the coaching staff has asked Hill to play corner, but he has balked at the idea since he plans to play safety in the NFL.

There was a time that Michigan talked to Hill about playing him both ways in college. I wonder if 2020 may be a year when Hill gets some opportunities on offense. Ambry Thomas got a look on offense as a sophomore in 2018, and Michigan lost three receivers from last season (Donovan Peoples-Jones, Tarik Black, and Nico Collins). Though there is still talent at receiver, I wonder if Hill might get a chance to make some plays.

Even if Hill sticks to defense only, we should see a big year from him. Though production might be down overall since the Big Ten is only slated to play nine games, I think Hill will have the best season of any Michigan safety since Harbaugh was hired in 2015. He’s fast and tackles well, and a year of experience under his belt should help with fleshing out opposing offenses. I’m excited about what he will bring to the table in 2020.

Hit the jump for some of Hill’s 2019 highlights.

END_OF_DOCUMENT_TOKEN_TO_BE_REPLACED 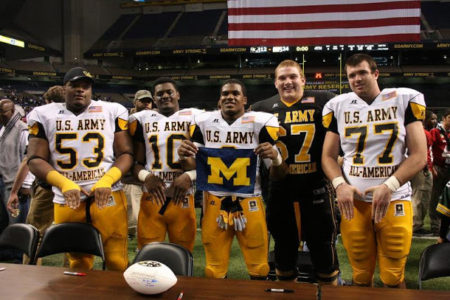 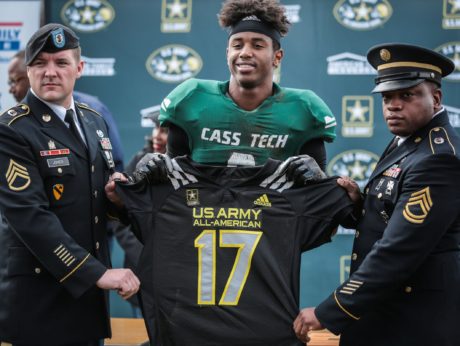 END_OF_DOCUMENT_TOKEN_TO_BE_REPLACED

A History of #1 Safety Recruits

You can help me out by ordering things through Amazon:

When Michigan has landed a #1 recruit in the past, I have always done a look back at how other #1 rated prospects have performed in the past. I meant to do that with the safety position after Daxton Hill committed to the Wolverines, but somehow I didn’t get around to it.

2000: O.J. Owens – S – New London (NC) North Stanly
Owens (Tennessee) played in eighteen games from 2000-2003 but never achieved a great amount of success. He did not play in the NFL. He dealt with shoulder and head injuries throughout his career and sued the NCAA in 2016 due to head injury concerns.

2001: Ernest Shazor – S – Detroit (MI) King
Shazor (Michigan) contributed as a redshirt freshman and spent three more years in Ann Arbor, making 166 tackles, 16 tackles for loss, 3 sacks, 4 interceptions (1 TD), 5 forced fumbles, 2 fumble recoveries, and 12 pass breakups. He was a First Team All-American in 2004. He made a questionable decision to leave for the NFL after his redshirt junior year, and he was not picked in the 2005 NFL Draft. He spent one season with the Cardinals, playing in just two games.