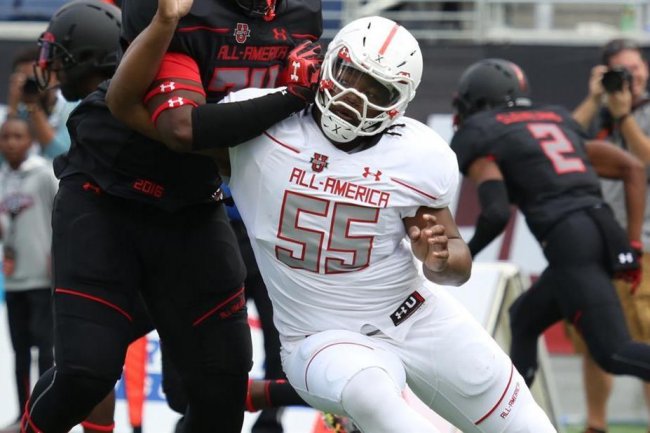 2016
Devin Asiasi – TE – Concord (CA) De La Salle: Asiasi is a 6’3″, 270 lb. prospect with offers from Alabama, Michigan, UCLA, USC, and Washington, among others. He’s a 247 Composite 4-star, the #2 athlete, and #50 overall. He had a touchdown catch in the U.S. Army All-American Bowl a couple Sundays ago. Michigan has been recruiting him as a tight end since shortly after Jim Harbaugh arrived in Ann Arbor, but he could also play on the defensive line. This is his official visit to Ann Arbor.

Joel Dublanko – LB – Bradenton (FL) IMG Academy: Dublanko is a 6’3″, 227 lb. prospect with offers from Akron, Mississippi State, and Tennessee, among others. He’s a 247 Composite 3-star, the #12 inside linebacker, and #359 overall. He does not have an offer from Michigan at this time, but since the Wolverines are in a questionable situation when it comes to linebacker depth, he could be in line for one. Originally from the state of Washington, Dublanko is now a teammate of 2016 tight end Isaac Nauta (Georgia).

Jordan Fuller – S – Old Tappan (NJ) Old Tappan: Fuller is a 6’1″, 196 lb. prospect with offers from Michigan, Notre Dame, Ohio State, Penn State, and Rutgers, among others. He’s a 247 Composite 4-star, the #6 athlete, and #130 overall. Also a U.S. Army Bowl participant, Fuller played corner in that game and could play a number of positions in college – safety, corner, or receiver. His older brother Devin just finished his senior year as a receiver at UCLA. This is Jordan’s official visit.

Hit the jump for several more official and unofficial visitors.

END_OF_DOCUMENT_TOKEN_TO_BE_REPLACED 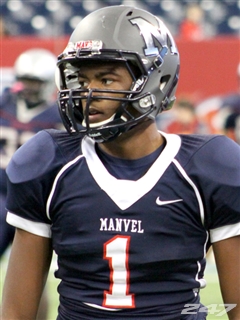 ADDED TO THE BOARD: 2016
Harbor City (CA) Narbonne offensive tackle Alex Akingbulu was offered by Michigan. Akingbulu is a 6’6″, 275 lb. prospect who just finished playing his first year of organized football, and Michigan is his first (and only) offer. Offensive coordinator Tim Drevno is the point man on him, so his west coast connections must have paid off with the little known recruit. Akingbulu does not have much technique at this point, but he is an impressive athlete who moves his feet really well. With a good deal of coaching, he could be pretty special. You might remember his high school from when Michigan was recruiting safety Sean Parker (Washington) in the 2010 class.


Manvel (TX) Manvel safety Deontay Anderson was offered by Michigan. Anderson is a 6’1″, 192 lb. prospect with offers from Alabama, Auburn, Florida, Florida State, Georgia, LSU, Notre Dame, Texas, Texas A&M, UCLA, and USC, among others. Basically, he can go to school wherever he wants. Michigan recently had a flirtation with his 2015 teammate, cornerback Will Lockett, who ultimately decided to stick to his UCLA pledge. Anderson is an early 247 Composite 5-star, the #2 returner (this is a category now?), and #25 overall in the class. As a junior in 2014, he made 59 tackles, 2 tackles for loss, 1 sack, 2 interceptions (1 returned for touchdown), 8 pass breakups, and 1 punt return for a touchdown.

Concord (CA) De La Salle tight end Devin Asiasi was offered by Michigan. Asiasi is a 6’5″, 255 lb. prospect with offers from Nebraska, Oregon, and USC, among others. He’s a 247 Composite 4-star, the #10 weakside end, and #148 overall. He’s a big kid but someone who can be split out at times, and he even takes an occasional direct snap. Former Michigan (and Idaho and New England Patriots) quarterback Matt Gutierrez was from there, and I recently watched When the Game Stands Tall, a decent football movie about the school, which set the national record for consecutive victories.

Hit the jump for a couple more offers, commitments elsewhere, and some random tidbits.

Huber Heights (OH) Wayne quarterback Messiah DeWeaver decommitted from Michigan on Tuesday night. DeWeaver is a 6’3″, 202 lb. prospect who committed to Michigan in June of 2014. He has picked up offers from Kentucky, Michigan State, and Penn State in the meantime, and he’s a 247 Composite 4-star, the #14 pro-style quarterback, and #306 overall. He held out through the coaching change and met the new staff, but ultimately, he has decided not to remain committed. DeWeaver transferred from Trotwood (OH) Trotwood-Madison – which has sent several players to Michigan over the years – to Huber Heights (OH) Wayne after the football season. Wayne has been somewhat kind to Michigan over the years, too, with 2015 safety commit Tyree Kinnel and then the Talbott brothers several years ago.

Oakland (CA) Bishop O’Dowd linebacker Camilo Eifler was offered by Michigan. Eifler is a 6’2″, 210 lb. prospect with offers from Colorado, Duke, and Washington. He’s a 247 Composite 3-star, the #45 outside linebacker, and #594 overall. Eifler is a speedy, hard-hitting linebacker, and I’m surprised that he doesn’t have more offers at this point. His head coach is Napoleon Kaufman, whom you may remember as a tremendously speedy running back for the Washington Huskies and then the Oakland Radiers.

Los Angeles (CA) Loyola cornerback David Long, Jr. was offered by Michigan. Long is a 6’0″, 175 lb. prospect with offers from Arizona, Arizona State, Miami, Oregon, UCLA, and Washington, among others. He’s a 247 Composite 3-star, the #34 cornerback, and #329 overall. He claims a 4.5 forty and a 34″ vertical. It’s unclear at this point whether Michigan wants him as a corner or receiver; he looks more engaged playing receiver, but he does have some skills on defense. Long is also friends with quarterback K.J. Costello and wide receiver Dylan Crawford, both Californians in the 2016 class whom Michigan has already offered.

OFF THE BOARD
Cincinnati (OH) Moeller tight end Jake Hausmann committed to Ohio State. Hausmann is one of the top few tight end prospects in the country. On the plus side, Michigan has also been pursuing Perry (OH) Perry tight end Luke Farrell, who also had the Buckeyes at or near the top of his list. This may open the door a little bit for Farrell to come up north, although he too has plenty of suitors.

MISCELLANEOUS
Lawrenceville (GA) Archer offensive tackle E.J. Price included Michigan in his top ten, specifically at #2. Price grew up in Grand Rapids, and he has stated that Michigan was his childhood favorite team. Price is a 6’6″, 290 lb. prospect who’s a 247 Composite 4-star, the #9 offensive tackle, and #65 overall. The 247 Crystal Ball currently has Georgia leading with some votes for Auburn, so there might be some ground to make up if the new staff wants to reel him in.