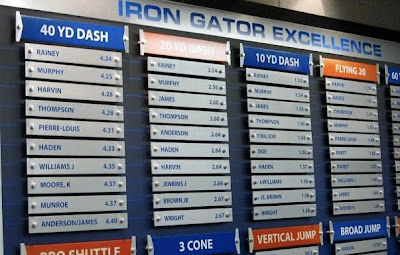 A few days ago, Dr. Saturday wrote another column about how 40 times are exaggerated. In the recruiting world, 40 yard dash times are thrown around by players, coaches, and fans in a careless game of one-upmanship. You know that guy at the party who says he drank 30 beers when you say you had 12? That guy is all over the place in high school and college football.

With the recent NFL Combine results being posted on the internet, I thought I’d compare those times to the times of recent Michigan recruits at a few positions.

Furthermore, one would believe that Sam McGuffie would be the second-fastest player in the draft (behind Clemson wide receiver Jacoby Ford) and that linebacker Josh Furman would have tied Clemson running back C.J. Spiller for the third-fastest time.

What conclusions can we reach from this information? The first answer is . . . well, nothing that we didn’t already know. High school forty times are exaggerated greatly. But the degree to which they are exaggerated borders on the ridiculous.

The second conclusion is that if Clemson can’t win with such elite speed on its roster, then heads need to roll.

And the third conclusion is that, whether his time is fake or not, Denard Robinson is still really, really fast.