I wrote up a post on Rudock when it was announced he was coming to Michigan back in April (LINK). He was Iowa’s starter for the past two years, but in the early off-season, Iowa head coach Kirk Ferentz named C.J. Beathard the starter. Rudock started thinking about playing his final season elsewhere. Michigan’s coaching staff was initially not interested until they got a firsthand look at what the current roster of quarterbacks offered; spring practice convinced them they needed another option.

Hit the jump for the rest of the post on Rudock.
END_OF_DOCUMENT_TOKEN_TO_BE_REPLACED

Hit the jump for the Rudock interview.
END_OF_DOCUMENT_TOKEN_TO_BE_REPLACED

Here’s a look at Jake Rudock’s game against Michigan from 2013: 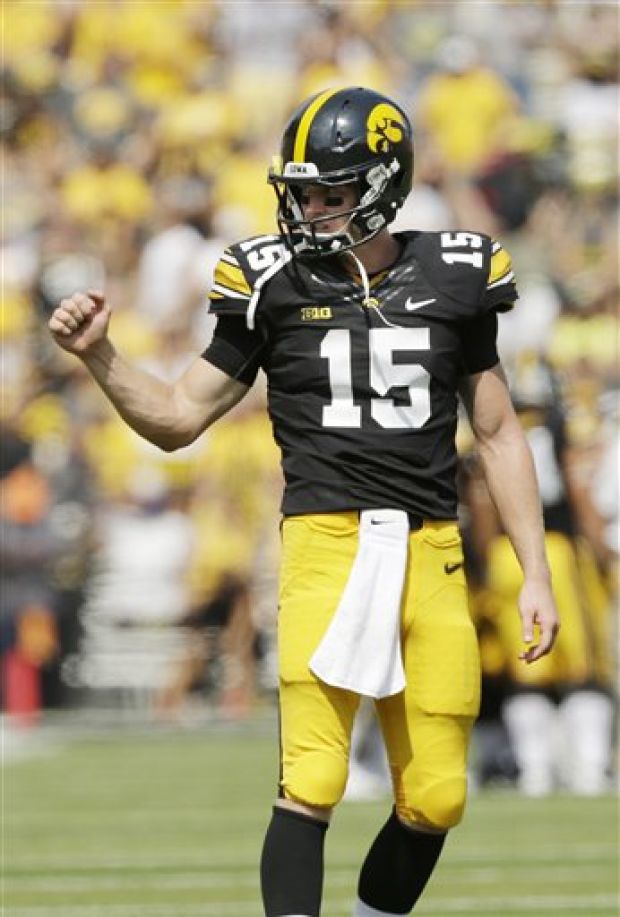 If you would like to help me meet the $3,000 goal for a site redesign, please use the Paypal link on the left sidebar or do some shopping at Amazon (LINK). Thanks to everyone who has donated a total of over $800 so far!
—————-

Dan Murphy and Bruce Feldman are both reporting that Iowa quarterback Jake Rudock has been granted a waiver from the Big Ten to transfer to Michigan. As a fifth-year transfer, he was also considering Boise State. Graduate transfers must enroll at a school in which their intended course of study is not available at the original institution.

Hit the jump for more on Rudock.

Rudock attended Fort Lauderdale (FL) St. Thomas Aquinas. In the 2011 class, he was a Rivals 3-star and the #29 pro-style quarterback. He chose the Hawkeyes over offers from Illinois, Minnesota, and Wisconsin, among others. St. Thomas Aquinas is a Florida powerhouse that has produced numerous big-time recruits over the years, including Joey Bosa (Ohio State), Lamarcus Joyner (Florida State), and Corey Holmes (Notre Dame). Coincidentally, Michigan is also accepting a transfer from John O’Korn, a University of Houston quarterback who was two years behind Rudock at St. Thomas Aquinas. Michigan hasn’t had a player from Aquinas in more than a decade, and now two are transferring in from other schools in the same year at the same position (O’Korn is a redshirt sophomore and will not be eligible to play in 2015). Perhaps even stranger is that cornerback transfer Wayne Lyons also comes from Fort Lauderdale, FL, although he went to Dillard. Here are Rudock’s senior highlights:

When I watch Rudock in both high school and college, I see a kid who has adequate football athleticism. He is not particularly tall. He has solid speed for a pro-style quarterback, but he won’t be the type to break open the game with his legs. More likely, he’s a guy who can pick up some short first downs or run bootlegs and threaten the edge. He’ll be able to outrun the occasional defensive end or linebacker, but he’s no match for most defensive backs. His arm strength is nothing spectacular, and he has to have his feet under him to make the deep throws. He won’t be able to throw posts or outs off of his back foot.

What I think Rudock can bring to the team is a steady hand at the quarterback position. He was a pre-med student at Iowa and wants to be a pediatric surgeon. Obviously, he has already earned his degree, and he has been a near full-time starter for a Big Ten team for two seasons. He did lose some time to C.J. Beathard this past season, but a 16-to-5 touchdown-to-interception ratio and 61.7% completions is pretty solid. Michigan fans would have gladly taken that kind of production over the past year, if not two. For a coach in Jim Harbaugh who wants to run the ball, use play action, and manage the game well, this is a pretty good fit. Harbaugh has had success with those types of players before, and Rudock should have a pretty seamless transition from one pro-style offense to another.

My early guess is that Rudock will be Michigan’s starter in 2015. (He finished fourth in a TTB poll last month about who would start.) Harbaugh has not been impressed by what Michigan already has in the program. Junior Shane Morris, the only returnee with experience, is 43/87 for his career with 389 yards, 0 touchdowns, and 5 interceptions. Otherwise, Michigan has redshirt freshman Wilton Speight, true freshman early enrollee Alex Malzone, and true freshman Zach Gentry coming over the summer. This also may not be the worst thing for Morris’s psyche, since the potential usurper is a fifth year senior with two years of Big Ten starting experience, and not a freshman who has never seen the field.

Rudock will give Michigan five eligible quarterbacks on the 2015 roster (with Morris, Speight, Malzone, and Gentry), and since he has just this one year remaining, he will not affect the 2016 recruiting efforts. Michigan has typically avoided transfers, but along with O’Korn, the Wolverines also recently announced that Stanford cornerback Wayne Lyons will be at Michigan this coming season (LINK).