ADDED TO THE BOARD: 2016
Winter Garden (FL) West Orange wide receiver Eddie McDoom was offered by Michigan. He’s a 5’11”, 170 lb. prospect with offers from Alabama, Clemson, Florida, Georgia, Ohio State, and Texas, among others. He’s a 247 Composite 3-star, the #65 wide receiver, and #392 overall. As a junior in 2014, he caught 47 passes for 854 yards and 15 touchdowns. McDoom is a speedy receiver who adjusts well to the ball in the air, which is something Michigan lacks. He is expected to stay in SEC country.

ADDED TO THE BOARD: 2017
Pittsburgh (PA) Central Catholic offensive guard Chris “C.J.” Thorpe was offered by Michigan. He’s a 6’2″, 308 lb. prospect with offers from Arizona State, Auburn, Penn State, and Pitt, among others. He’s a 247 Composite 4-star, the #6 offensive guard, and #220 overall. He is also a teammate of 2016 defensive back Damar Hamlin, who is expected to commit to Ohio State sooner or later. Some sites list him as a defensive tackle, but I think he might be a little too stiff to play defense. However, he is a very violent and relentless blocker on offense who has good foot quickness, if not ideal flexibility.

Hit the jump for another few 2017 offers, a 2018 offer, some guys who went off the board, and some other bits.

END_OF_DOCUMENT_TOKEN_TO_BE_REPLACED 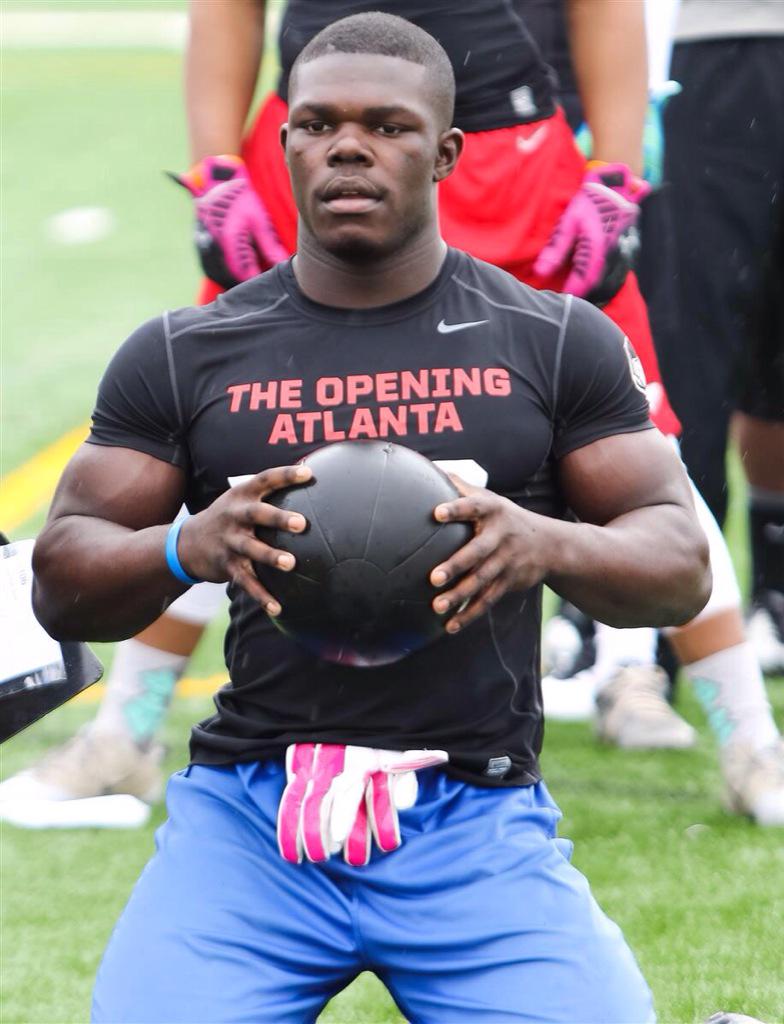 ADDED TO THE BOARD: 2016
Farmington Hills (MI) Harrison defensive end Khalid Kareem decommitted from Alabama. He’s a 247 Composite 4-star, the #9 strongside end, and #195 overall. When Harrison originally committed to the Crimson Tide, Michigan thought they might secure his commitment and got surprised. The Wolverines continued to recruit him, but now they feel as if they have a good chance at some other players, so they have not been recruiting Kareem. Notre Dame looks like a legitimate option.

Hit the jump for a new 2017 offer, some guys who went off the board, and some random bits.

END_OF_DOCUMENT_TOKEN_TO_BE_REPLACED 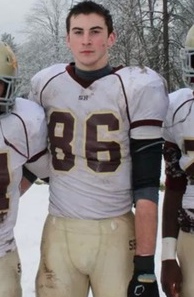 ADDED TO THE BOARD: 2016
Miramar (FL) Miramar defensive end Terrell Lucas was offered by Michigan. He’s a 6’3″, 220 lb. prospect with offers from Minnesota and Tulane. He’s a 247 Composite 3-star, the #67 weakside end, and #1152 overall. Lucas was at the satellite camp in Tampa, and the coaches extended him an offer after evaluating him in person. His film is not particularly impressive, as he looks a little undersized and lacks the explosion I would expect in an undersized weakside end.

Dudley (MA) Shepherd Hill tight end Sean McKeon was offered by Michigan. He’s a 6’5″, 230 lb. prospect with offers from Boston College, Connecticut, Syracuse, Temple, and UMass, among others. He’s a 247 Composite 3-star, the #64 tight end, and #1489 overall. He claims a 4.69 forty. His highlights show a long, lanky kid who looks a little awkward and gangly, but he shows some toughness and an ability to grind out extra yards after the catch.

Pembroke Pines (FL) Flanagan safety Josh Metellus was offered by Michigan. He’s a 6’0″, 187 lb. prospect who is currently committed to Georgia Southern. He’s a 247 Composite 2-star, the #134 safety, and #1915 overall. He claims a 33″ vertical, a 245 lb. bench press, and a 325 lb. squat. Unless he has hit a growth spurt since his junior season, he’s probably an inch or two under his listed height and weight, but he is an aggressive hitter from the safety position and shows some nice ball skills, too. He was at the satellite camp held just outside of Miami, FL. He is another teammate of 2016 offerees Devin Bush, Jr. and Devin Gil.

Delray Beach (FL) Atlantic cornerback Antwaine Richardson was offered by Michigan. He’s a 6’0″, 165 lb. prospect with offers from Miami, Rutgers, West Virginia, and Wisconsin, among others. He’s a 247 Composite 3-star, the #86 cornerback, and #867 overall. As a junior in 2014, he made 35 tackles, 2 interceptions, 3 forced fumbles, and 10 pass breakups. Richardson is a lanky corner who needs to add weight, but he changes direction well and is pretty physical for being a skinny guy. He attends the same school as 2015 defensive end signee Shelton Johnson.

ADDED TO THE BOARD: 2017
Tampa (FL) Tampa Bay Tech wide receiver Daquon Green was offered by Michigan. He’s a 6’1″, 183 lb. prospect with offers from Auburn, Florida, Georgia, Miami, Ohio State, and several others. He’s a 247 Sports 4-star, the #33 wide receiver, and #210 overall. Green was one of the stars of the show at the Tampa satellite camp. He’s a speedster who can take the top off of a defense and run after the catch.

Pembroke Pines (FL) Flanagan wide receiver Clevan Thomas, Jr. was offered by Michigan. He’s a 5’10”, 185 lb. prospect whose lone other offer comes from Temple. Another teammate of Bush, Gil, and Metellus, Thomas earned his offer at the Miami satellite camp.  Thomas is the son of Clevan Thomas, a former Florida State cornerback (6 career interceptions) who went on to become a three-time Arena Football League Defensive Player of the Year and Hall of Famer (73 career interceptions, 11 kickoff return touchdowns). Flanagan is Thomas’s third school after playing at Miami Jackson and Miami Booker T. Washington.

ADDED TO THE BOARD: 2018
Thomson (GA) Thomson cornerback Christian Tutt was offered by Michigan. He’s a 5’11”, 171 lb. prospect with offers from Alabama, Auburn, Clemson, South Carolina, and Tennessee, among others. Tutt is obviously a young kid, and his highlights are not very lengthy, but he does show some ability as a kick returner.

OFF THE BOARD
Hallandale (FL) Hallandale wide receiver Joshua Hammond committed to Florida. Hammond’s older brother, Frankie Hammond Jr., played for the Gators and spent the last two seasons as a wide receiver with the Kansas City Chiefs.

Darien (IL) Hinsdale South defensive end Josh King committed to Michigan State. Prior to his commitment, he tweeted out that his choice would make people’s heads spin. He seemingly forgot to check his 247 Sports profile page, which had 79% of predictions in favor of . . . Michigan State. Michigan, Notre Dame, and Ohio State were all tied for second place with 5% of the votes.

Fort Wayne (IN) Bishop Luers wide receiver Austin Mack committed to Ohio State. Michigan was his leader many moons ago, and he even visited again recently, but for a long time, he has been expected to be a Buckeye.

Fort Wayne (IN) Wayne defensive end Auston Robertson committed to Michigan State. Just like King and Mack, this had been expected for a long time. Robertson had also visited Michigan several times and recently put the Wolverines in his top three, replacing Ohio State, but any late addition to a top three means it’s a long shot.

MISCELLANEOUS
Farmington Hills (MI) Harrison defensive end Khalid Kareem has set an announcement date for June 24th. He took a visit to Michigan two weekends ago that reportedly had a big impact on him because of its focus on academics. Kareem was previously committed to Michigan State for a short time this spring, but new circumstances are pointing toward him choosing Michigan.

Saline (MI) Saline quarterback Joshua Jackson has set an announcement date for Thursday. Jackson does not hold an offer from the Wolverines, but he is the son of former running backs coach Fred Jackson and the brother of former wide receiver Jeremy Jackson. He has offers from Minnesota, Northwestern, Utah, Virginia Tech, and West Virginia, among others. He’s a 247 Composite 3-star, the #14 dual-threat quarterback, and #411 overall. He is expected to be a Hokie by the end of the week. 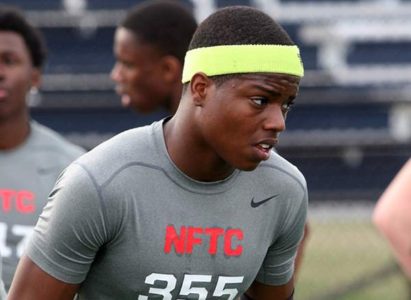 Poll results: Who is the best in-state player in Michigan?

If you are so inclined, please help out with the TTB redesign drive by making a donation on Paypal (see left sidebar) or by doing some shopping at Amazon (LINK). Your assistance is greatly appreciated as I work toward moving away from Blogger. Thanks!
—————

A few weeks ago, I posted a poll asking: Who is the best in-state player in the 2016 class? I posted my own opinion shortly after National Signing Day (LINK).

Here are the results of the poll: