﻿ For the most part, I try to concentrate on Michigan football here at Touch the Banner.  With a full-time job and a strong dedication to Wolverines athletics, I really don’t have time to keep up with all the goings on in college football around the country.  So when scandals happen at USC and even Ohio State, I typically keep my nose to the maize-and-blue grindstone.

With all that being said, Jim Tressel is an idiot.

The e-mails that came out recently are damning to the nth degree.  I have always had a begrudging respect for Tressel, who is a polished, well spoken man with a squeaky clean personal record.  He’s never been in trouble for drunk driving, hiring prostitutes, choking his players, cussing out reporters, etc.  I guess that’s why they call him Senator.

And the Senator is a good nickname, because it turns out that the image of moral superiority is just a facade.  Just like any of hundreds of politicians in recent history, the dirty secrets are starting to leak.  I will be the first to admit that I don’t have huge qualms with every single one of the Ohio State football program’s transgressions during Tressel’s decade as a coach.  When a coach has 100+ players on his team, many of whom come from meager backgrounds, it’s difficult to follow what each of those 100+ players does on a daily basis.  And as much as a coach would like to believe that his players will follow team, university, and NCAA rules on a daily basis, we all know that college kids will be college kids.

But the pattern under Tressel is becoming more and more daunting for him to overcome.  He has had several star players face disciplinary action for taking improper benefits – A.J. Hawk, Nick Mangold, Maurice Clarett, Terrelle Pryor, Troy Smith – and the punishments from above have been fairly light.  Of course, Ohio State’s athletic director Gene Smith came out and essentially said, “Come Hell or high water, Jim Tressel is our coach.”  And why not?  Tressel wins a bunch of games, often wins the Big Ten championship, and even pulled in a national championship eight years ago.  Gene Smith and university president Gordon Gee want to True Grit this horse until it dies.

But at some point, each dynasty fails.  Look at Alabama in the early ’90’s.  Look at the University of Michigan under Rich Rodriguez.  Look at USC prior to Pete Carroll.  Tennessee.  Florida.  Texas in 2010.  Ohio State hasn’t had a truly bad year since 1999, when John Cooper went 6-6.

And the key point here with Tressel is that he had options.  Punishments are far less severe when evildoers (I figured that if Tressel can quote George W. Bush, then so can I) admit their evildoings.  Tressel could have taken the e-mails he received directly to the Buckeyes’ compliance director when Tressel received them in April 2010.  Instead, he chose to keep it quiet, and that’s why Ohio State is in this miss right now.  ESPN writer and author of Meat Market Bruce Feldman pointed out yesterday that the NCAA basically ended Oklahoma State wide receiver Dez Bryant’s career for lying about improper benefits he received through contact with Deion Sanders.  And keep in mind that it wasn’t the benefits that Bryant was banned for – it was because of the lies.  He stated that he had provided accurate information to the NCAA.  Tressel also signed the same type of affidavit, stating that he had given the appropriate information to the NCAA investigators.

So if a 20-year-old kid like Bryant loses his amateur status for lying to the governing organization, how can anyone justify a 58-year-old coach doing the same thing?

Tressel was presumably concerned that the offenses would get his players suspended or cause them to be permanently ineligible, the latter of which would be a preposterous punishment.  College kids should not lose their chance to play football just for giving out some autographs and memorabilia in exchange for free tattoos and a few hunder dollars.  Suspended?  Yes.  Forced to repay the money?  Absolutely.  Banned permanently?  Let’s not be ridiculous.

A quick bit of critical thinking should have told Tressel that Pryor and company would have received a slap on the wrist.  What would that have meant for Ohio State’s football team in 2010?  Let’s take a look.  If those five players received the same punishment for the 2010 season as they now must face for 2011, they would have missed:

That’s a likely 4-1 record after that five-game stretch, which would have essentially removed the Buckeyes from national title contention, but still would have allowed them to be in the race for the Big Ten and a BCS bowl game.  And it’s not like Pryor would have actually led them to a national title, because that kid’s a bigger moron than his coach.

So Tressel risked his job and program based on the difference between a 12-1 season and, at worst, a 10-3 year (if you grant Illinois a victory).  Get out the hypothetical pitchforks!

If the NCAA were fair, it would suspend Tressel for the entire 2011 season.  If Ohio State had standards, it would fire Tressel.  In my opinion, all twelve victories from Ohio State’s 2010 season should be vacated.  And if we’re talking about Practicegate vs. Tressel-gate, then the Buckeyes ought to be put on several years’ probation.  And if we’re talking about Reggie Bush-gate (in which USC’s coaches denied knowledge of improper benefits) vs. Tressel-gate, Ohio State ought to lose some scholarships in the coming years.  The program in Columbus has a long history of these things happening, and at some point, the NCAA needs to stop slapping Ohio State’s wrist and come up with some sort of viable punishment. 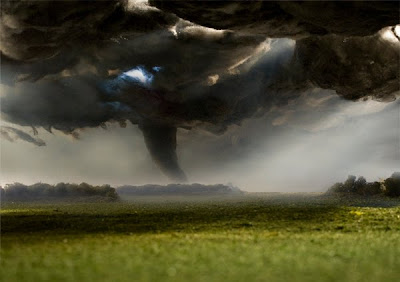 Matthew Albanese photography
The most recent Paste magazine highlighted the art of Matthew Albanese, a New Jersey native who creates landscape art from household items and the contents of his spice rack. True story. The above photograph isn’t an actual twister blowing through the Great Plains. The miniature set was created from steel wool, moss, and ground parsley.

There’s more neat stuff featured on Albanese’s website, like a Mars scene made from paprika and a volcano built from tile grout and cotton. Since I have no artistic skill whatsoever, I’m often enthralled by people who make unique art. Mr. Albanese seems to fit that category.