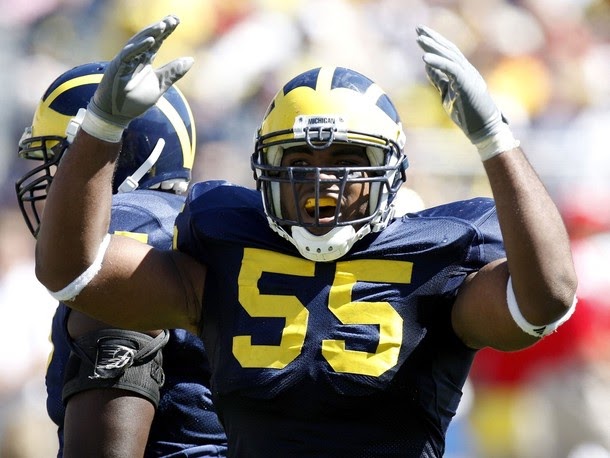 This post was supposed to go up yesterday, but I ran out of time due to holiday obligations.

These ten Wolverines are my favorite all-time Michigan players.  Some are great.  Some aren’t.  But for one reason or another, these guys have made it fun to be a Michigan fan.

1. Brandon Graham, 2006-2009.  Graham was a terror from the defensive end position.  In addition to his physical talents, he matured a great deal from his freshman year (in which he played defensive tackle because he really liked to eat).  Not only do I like Graham for the plays he did make (for example, blowing up MSU running back Glen Winston in 2009), but I like him for the plays he almost made, too (nearly chasing down Javon Ringer in 2008).  It all added up to a first round pick by the Eagles in 2010.

2. Charles Woodson, 1995-1997.  Everybody knows about Woodson.  He was an all-everything recruit and named the Big Ten Freshman of the Year in 1995.  He was a First Team All-American in 1996 and the Defensive Player of the Year.  Then he topped it off in 1997 with the Jim Thorpe Award and the Heisman Trophy.  Every time Michigan needed a play, it seemed like Woodson was there to make it.  There’s just something about the way Woodson moves on the field that makes him fun to watch, even now as a 34-year-old Green Bay Packer.

3. Tshimanga Biakabutuka, 1993-1995.  It seems like a long time since Michigan has had a player like Biakabutuka – a guy who carries a large load and can make big plays in the meantime, not just wear down the defense.  Biakabutuka was a soccer player as a youngster and is a great example of what I call “soccer feet.”  Soccer players have a certain, recognizeable gait and way of moving around the football field, and #21 had some of the quickest feet I’ve seen from a big back.  He became a first round pick of the Carolina Panthers, but was hampered by injuries in the NFL.  His school record 1,818 yards in 1995 might be broken by Denard Robinson this season, but it’s pretty special when a running back averages 6.0 yards a carry . . . for his entire career.

4. Lloyd Carr, 1980-2007.  Carr has taken a lot of heat for what happened to the program after his coaching career ended.  I think that is somewhat overblown.  Regardless, Carr was a great coach when he was in Ann Arbor.  He always seemed to do the right thing, and he kept issues private that ought to be private.  It also helps that he won a national championship.  While I’ve always respected Bo Schembechler, Lloyd Carr will probably remain my favorite Michigan coach of all-time.

5. Jason Avant, 2003-2006.  Avant was the most reliable receiver I’ve seen at Michigan.  His teammate Braylon Edwards got the hype and the high draft pick, but Avant seemed to catch every single ball thrown to him.  He wasn’t very tall and didn’t have great speed, but he was always in the right place and made the play.  He ended his senior year with 82 catches for 1,007 yards and 8 touchdowns, earned honorable mention All-America status, and was named the MVP of the team.  He cashed in his intangibles when he was drafted in the fourth round by the Philadelphia Eagles.

6. Desmond Howard, 1988-1991.  Howard was larger than life when I was a kid.  Even though Michigan became a more pass-oriented team later in the ’90s and into the 2000s, Grbac-to-Howard was the most lethal passing combination I’ve seen at U of M.  The fact that he won the Heisman Trophy in 1991 is secondary, though.  My favorite fact about Desmond Howard is that after the Wolverines beat the Purdue Boilermakers in that 1991 season, I was one of the little kids who stuck his hand through the railing by the tunnel . . . and Howard gave me a high five on his way into the tunnel.

7. William Carr, 1993-1996.  Carr was Mike Martin before Mike Martin was Mike Martin.  Playing the nose tackle position back in the mid-’90s, Carr had 82 tackles, 21 tackles for loss, and 6 sacks as a junior.  Those are ridiculous numbers for a nose tackle.  He was a fire hydrant in the middle of those stout Michigan defenses and was a first team All-American in ’96.  He was only a seventh round pick of the Cincinnati Bengals, though, and never did much in the NFL.

8. Brandent Englemon, 2003-2007.  Englemon was the type of success story that I like to see at Michigan.  He was a solid player throughout his career, but never had any spectacular seasons.  He could have departed after the 2006 season with his degree, but he wanted to remain for a fifth year and contribute further.  The coaches were ready to let him go and use the scholarship on a younger player, but Englemon convinced them otherwise.  He responded by earning the starting job at free safety, tallying 86 tackles and 3 interceptions in his final season.

9. Jake Long, 2003-2007.  Long was perhaps Michigan’s best offensive lineman of all time.  He was the athletic, mauling lineman that should be the prototype for the position.  At 6’7″ and 313 lbs. with long arms and quick feet, Long could collapse one whole side of a defensive line or stay in front of some of college football’s best pass rushers.  I was thoroughly excited to see Michigan pull out the good old “tackle sreen left” play in the 2008 Capital One Bowl against the Florida Gators; unfortunately, quarterback Chad Henne overthrew Long.  I would have loved to see Long rumble down the field with the football.

10. Jordan Kovacs, 2009-present.  It might seem odd for me to pick Kovacs here, a player whose talent I’ve derided right here on this very blog.  He’s pretty small, he’s not very fast, etc.  All those things remain true.  Still, it’s somewhat remarkable that he stepped onto the field at Michigan and earned a starting job as a redshirt freshman in 2009.  He tallied 75 tackles, 2 forced fumbles, and 1 interception that season, earning second team All-America status.  Despite Michigan bringing in some talented secondary players around him, Kovacs continues to hold onto the starting job at strong safety.  I have to admire what he’s achieved.