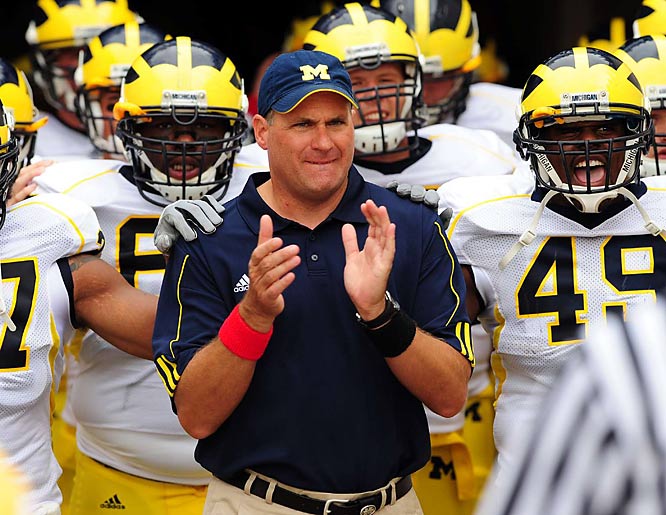 1.  Losing games.  This is obvious, but it belongs on the list.  Rodriguez finished his three years at Michigan with a 15-22 record.  That winning percentage (.405) is the worst in Michigan history.

2. Losing to rivals.  Rodriguez was 0-6 against Michigan’s two biggest rivals, Ohio State and Michigan State.  If you want to include Penn State, he was 0-9.  He was outscored by a total of 317-140 in those nine games.  It’s unclear how much a couple victories against Ohio State or Michigan State might have affected Rodriguez’s tenure, but wins against Indiana and Purdue don’t carry the same weight.

3. Neutering Scott Shafer.  Shafer has proven to be a solid defensive coordinator at every other stop – Western Michigan, Stanford, and Syracuse.  The former two were prior to Shafer’s hiring at Michigan.  But Rodriguez’s other defensive assistants were proponents of the 3-3-5 and seemed to undermine his authority.  Late in the season, Rodriguez even authorized a mid-season switch of defensive schemes from the 4-3 to a 3-3-5; Michigan subsequently allowed 42 points to Purdue, a team using a converted running back to play QB.  Shafer could have been a good coordinator at Michigan and helped Rodriguez keep his job, but he was fired after the 2008 season because, well, someone’s head needed to roll after a 3-9 season.

4. Hiring Greg Robinson.  Robinson had intermittent success as a coordinator in the NFL and in college.  But just like Shafer, Robinson was a 4-3 or a 3-4 guy.  In my opinion, the defense showed some promise in 2009, when Robinson used safety Steve Brown as an outside linebacker and freshman Craig Roh as a rush linebacker.  However, Rodriguez used the 2009-10 offseason to convert to the 3-3-5, and Robinson was obviously uncomfortable and inexperienced with running that defensive set.  That resulted in 458 points allowed in 2010, an average of 35.2 points per game.

5. Not retaining holdover players from the Carr era.  Michigan was extremely short-handed in 2009, fielding a team of 69 or 70 players who were given scholarships right out of high school.  Some of those players were bound for a career of anonymity, I’m sure, but others were not.  Quarterback Ryan Mallett was vaguely in Heisman contention this season.  Justin Boren became an All-Big Ten guard at Ohio State.  Adrian Arrington chose to enter the NFL Draft (and became only a 7th round choice) a year early.  Rodriguez can’t shoulder the blame entirely for these departures, but there’s no question that a guy like Boren would have been helpful in 2008 and 2009, the former season featuring a starting guard (John Ferrara) that was a mid-season position switcher from defensive tackle.

6. Stretching too much.  The Detroit Free Press reported some trumped-up charges regarding Michigan’s practice schedule, and that sparked an NCAA investigation.  While the charges were blown out of proprtion, they were a black mark on the Michigan program and resulted in probation and some lost practice hours.  Rodriguez wasn’t responsible for everything that went wrong in the compliance department, but his staff did fail to keep track of its countable practice hours accurately and a graduate assistant watched some voluntary 7-on-7s, which is a no-no.

7. Not finding his Steve Slaton.  Pat White got a lot of hype at West Virginia, but running back Steve Slaton was almost as important as White.  And prior to White’s arrival on campus, Rodriguez used running backs like Quincy Wilson and Kay-Jay Harris to great effect.  Rodriguez never found “that guy” at Michigan, partially due to injuries and partially due to recruiting.  Therefore, the offense wasn’t as spectacular as it might have been.  The lack of a running game cost Michigan a couple games throughout his tenure.

8. Not developing top prospects.  Rodriguez seemed to have an abnormal number of high-end recruits bomb out of the program.  And it’s probably a coincidence, but most of them seemed to come from the defensive secondary.  Four 4-star players recruited by Rodriguez never made a significant positive impact at Michigan (Demar Dorsey, Boubacar Cissoko, Justin Turner, Vladimir Emilien), which resulted in five true freshman defensive backs seeing significant time in 2010.  Furthermore, arguably Michigan’s best prospect in the last few classes (William Campbell) has yet to make an impact at Michigan and just switched from nose tackle to offensive guard in the middle of the season.

9. Handing out the #1 jersey to J.T. Floyd.  Before Rodriguez ever coached a snap at Michigan, he tried to give the #1 jersey to true freshman cornerback J.T. Floyd.  He was either unaware of the jersey’s significance or chose to ignore that aspect, but it was nonetheless a mistake.  Nothing seemed to highlight the fact that Rodriguez wasn’t a “Michigan Man” more than the #1 jersey snafu, which pitted some alumni and fans against him from the start.

10.  Poor player personnel decisions.  Part of the heat falls on the assistant coaches, but Rodriguez shoulders most of this blame because he has the final say: Rodriguez didn’t put his players in their best positions to succeed.  Running backs Sam McGuffie and Vincent Smith played far too much when there were more productive and explosive backs on the roster (Brandon Minor and Michael Shaw for starters).  Obi Ezeh should have been an outside linebacker starting back in 2008; and at least according to their play on the field, Ezeh should have been replaced by Kenny Demens much earlier.  Cameron Gordon – who has linebacker speed – spent half the 2010 season playing free safety.  William Campbell spent two years toiling on the defensive line before making a permanent move to the offensive line, and he didn’t even redshirt to allow for a fifth year of eligibility.