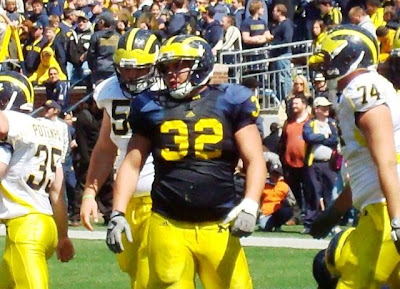 Michigan defensive tackle (and former fullback) Vince Helmuth has decided to transfer. Helmuth would have been a junior this year and converted to the defensive line during the 2008 season. He bulked up a little too much for spring practice and Rich Rodriguez called him out during one of his spring practice press conferences.

Despite Helmuth’s additional bulk, he was buried on the defensive tackle depth chart this year. With only one regular DT on the field on most snaps, Helmuth was behind Mike Martin, Renaldo Sagesse, and freshman Will Campbell, all of whom are in the same class or younger. This does hurt the depth chart somewhat, as there are only three scholarship defensive tackles remaining on the roster, but at most he probably would have given Martin an occasional breather and helped out on special teams. (For what it’s worth, he was my #57 most important player on this year’s roster.)

The pain from this transfer is felt threefold:

1) It hurts depth at DT and necessitates landing at least one tackle in the 2010 recruiting class.
2) Helmuth’s transfer – along with all the others – has Michigan falling dangerously close to scary APR levels.
3) Helmuth was a local kid (from Saline High School), meaning many Michigan fans were a smidgen more interested in his success.

Early rumors suggest that Helmuth might join his brother at Eastern Michigan (which is now coached by former Michigan defensive coordinator Ron English).