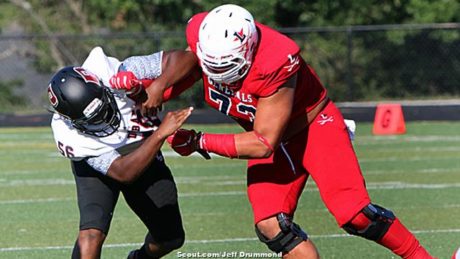 Jess Speight – OG – Richmond (VA) Collegiate: Speight is a 6’4″, 275 lb. prospect with no other FBS offers before picking one up from the Wolverines at Michigan’s on-campus camp on June 21. He’s the younger brother of Michigan quarterback Wilton Speight.

Jedrick Wills – OT – Lexington (KY) Lafayette: Wills is a 6’5″, 318 lb. prospect with offers from Alabama, Florida, Georgia, Kentucky, LSU, Michigan, Notre Dame, and Ohio State, among others. He’s a 247 Composite 4-star, the #7 offensive tackle, and #36 overall. Michigan is definitely playing from behind, as he has been lukewarm on the Wolverines throughout the process so far. However, I think he’s an elite tackle and he would be at or near the top of my board.

Jason Whittaker – QB – Rockford (MI) Rockford: Whittaker is a 6’5″, 195 lb. prospect with offers from Central Michigan and Eastern Michigan. He camped at Michigan on June 21. He was a teammate of 2016 Michigan signee Quinn Nordin.

Dale Chesson – WR – St. Louis (MO) Ladue Horton Watkins: Chesson is a 5’11”, 160 lb. prospect with no offers at this time. He camped at Michigan early in the week. He’s the younger brother of Michigan wide receiver Jehu Chesson.

Jaydon Haselwood – WR – Ellenwood (GA) Cedar Grove: Haselwood is a 6’4″, 175 lb. prospect with offers from Alabama, Georgia, LSU, and Michigan, among others. He was a teammate of 2016 Michigan signee Elysee Mbem-Bosse, along with several other 2017 and 2018 prospects who have offers from the Wolverines. Haselwood camped at Michigan on June 21.