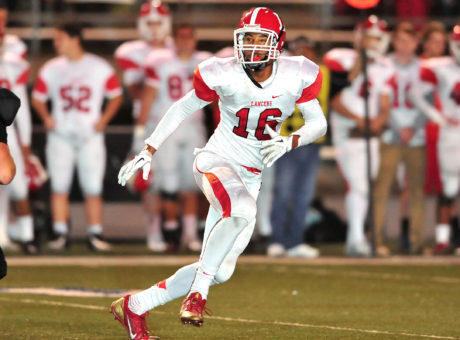 Keisean Lucier-South – DE – Orange (CA) Lutheran: Lucier-South is a 6’5″, 225 lb. prospect with offers from Michigan, Notre Dame, Oklahoma, Oregon, UCLA, and USC, among others. He’s a 247 Composite 5-star, the #2 weakside end, and #23 overall. Lucier-South called Michigan a “dream offer” when he got it, but teams like Oklahoma and USC have been making a push since then. While both teams have been the victim of upsets this season, neither is going through a 2-4 season and/or potential coaching change. This is Lucier-South’s official visit.

Mook Reynolds – CB – Greensboro (NC) Northern Guilford: Reynolds is a 6’0″, 175 lb. prospect who is committed to Virginia Tech. He also has offers from Georgia, Michigan, Notre Dame, and Tennessee, among others. He took an official visit to Knoxville last weekend, and this is his official visit to Ann Arbor.

Zach Robertson – OG – Bellflower (CA) St. John Bosco: Robertson was originally scheduled to take an official visit to Ann Arbor for the Penn State game, but he has since canceled. He’s the #319 player in the class, according to the 247 Composite.

Auden Tate – WR – Tampa (FL) Wharton: Tate is a 6’4″, 215 lb. Florida State commit; he also has offers from Clemson, Florida, Georgia, Michigan, Ohio State, and numerous others. Michigan was an early favorite and was in his top group before he committed to the Seminoles, so there’s an outside shot that Michigan could flip him if things go in the right direction for Michigan. Unfortunately, he’s an early enrollee, so an iffy coaching situation would likely spell doom for Michigan’s chances.

Ahmad Wagner – WR – Huber Heights (OH) Wayne: Wagner is a 6’6″, 190 lb. prospect with an offer from Kentucky. A teammate of Kinnel’s, he’s also a high level basketball prospect (Iowa and Minnesota have offered). He may fit the profile of the jumbo wide receiver Michigan likes if they find themselves scrounging for wideouts.

Austin Mack – WR – Fort Wayne (IN) Bishop Luers: Mack is a 6’2″, 205 lb. prospect with offers from Michigan, Notre Dame, and Ohio State, among others. He’s a 247 Composite 4-star, the #20 wide receiver, and #96 overall. He claims a 4.55 forty but looks more like a possession receiver. He originally had Michigan out front, but now it seems Notre Dame has pulled ahead.

Clark Yarbrough – OT – Woodberry Forest (VA) Woodberry Forest: Yarbrough is a 6’5″, 255 lb. prospect with offers from Clemson, Florida, Michigan, Oklahoma, Virginia, and Virginia Tech, among others. He’s a 247 Composite 4-star, the #17 offensive tackle, and #205 overall. Yarbrough had Michigan in his top couple schools, so Michigan’s coaching situation could have a big impact.

Corey Malone-Hatcher – DE – St. Joseph (MI) St. Joseph: Malone-Hatcher is a 6’3″, 235 lb. prospect with a lone offer from Ohio State. He’s considered one of the top few players in the state for his class.

Donovan Peoples-Jones – WR – Detroit (MI) Cass Tech: Peoples-Jones is a 6’1″, 170 lb. prospect with offers from Miami, Ohio State, and Penn State, among others.