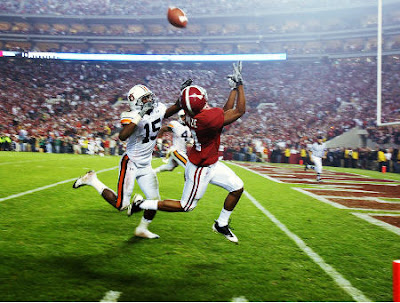 Marquis Maze
Wide receiver Marquis Maze was committed to be a member of the 2007 recruiting class. Recruited as a wideout for Michigan, he always seemed to be a bit undersized; he was 5’8″ and 160 lbs. during a time when Michigan was annually churning out 6’3″-ish wide receivers like David Terrell, Marquis Walker, Braylon Edwards, and Adrian Arrington, among others.

Before signing day arrived, though, Maze decommitted from the Wolverines and decided to attend Alabama. He redshirted as a freshman in 2007 and has earned more and more prominent roles the past two seasons.

Unbeknownst to him, Michigan coach Lloyd Carr would be replaced by Rich Rodriguez in December 2007, who would bring an offense in which Maze could have thrived. Rodriguez was reduced to playing a true freshman (Martavious Odoms) and a bigger receiver who was a misfit (Toney Clemons) at the slot receiver position in 2008. Odoms did well, but Clemons floundered and transferred to Colorado prior to the 2009 season.

This past season as a redshirt sophomore and now listed at 5’10” and 180 lbs., Maze started at wide receiver and recorded 31 receptions for 523 yards (a 16.9 yard average) and 2 touchdowns, including an 80-yarder. Oh by the way, he also won a national championship.

Meanwhile, the majority of Michigan’s snaps at slot receiver went to the trio of Kelvin Grady, Martavious Odoms, and Roy Roundtree. Those players combined for 64 catches, 808 yards (12.6 yard average), and 5 touchdowns. Redshirt freshman Roundtree turned out to be the most explosive of the three, leading the entire team in each category and besting Maze in receptions (32 to 31) and touchdowns (3 to 2).

Maze is a big-play threat for the Crimson Tide, but his presence on the Michigan team in 2009 probably wouldn’t have made a huge difference. He would have been more valuable in 2008, when he likely would have started for then-freshman Odoms. Still, Maze has a good thing going at Alabama, and Michigan has some promising athletes going forward into the 2010 season. This is a departure that most Michigan fans shouldn’t – and probably don’t – regret.

Tags: Kelvin Grady, Marquis Maze, Martavious Odoms, Roy Roundtree, What Could Have Been
Spread the word!