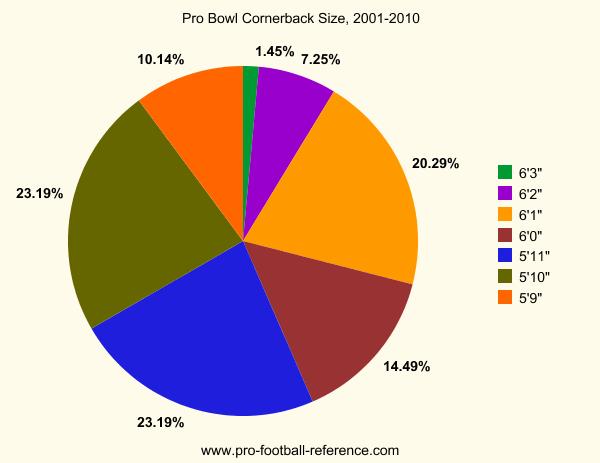 In response to a recent discussion over on MGoBlog about preferred heights for cornerbacks, I figured that I would do a little bit of research into the heights of cornerbacks.  In general, I am not a big fan of short cornerbacks.  That has factored into my assessments of several Michigan recruits or potential recruits, including Cass Tech Technicians Boubacar Cissoko, Dior Mathis, and Delonte Hollowell.

Presumably, Michigan coaches, players, and fans would like to see Michigan products have success at the NFL level.  Of course, not every Wolverine will make it to the NFL or have success there, and college production is separate from the impact on the professional game.  However, I think it’s relevant to look at Pro Bowl cornerback size.  After all, trends in the NFL generally trickle down to college and then high school.

I looked at the cornerbacks selected for the Pro Bowls over 10 seasons, from 2001-2010.  Overall, there were 69 cornerback selections for those Pro Bowls (3 per conference each year, plus injury replacements).

The tallest cornerback to make the Pro Bowl was Philadelphia Eagles cornerback Bobby Taylor at 6’3″.

The shortest cornerbacks to make the Pro Bowl were the quartet of Aaron Glenn, Antoine Winfield, Cortland Finnegan, and Dre Bly, all of whom measured in at 5’9″.

I presume that most players who are 6’3″ or taller get steered away from the cornerback position; most are probably either steered toward safety or told to put on weight and become a linebacker.  Of course, there’s also a trend of tall wide receivers in football, so many skilled, tall athletes probably don’t play defense.  On the other hand, I would venture a guess that there is a much larger group of athletic kids who are 5’8″ or 5’9″ and get steered toward cornerback in college and the NFL.  For every 6’3″ wanna-be cornerback out there, one could probably find ten 5’9″ wanna-be corners.  So the pool of taller players is likely much smaller than that of short corners.

In summary, NFL Pro Bowl selections over the last decade support the idea that diminutive cornerbacks don’t have great success at the NFL level.  That doesn’t mean that shorter players are precluded from being successful in college or even the NFL, but the ideal height for cornerbacks tends to be anywhere from 5’10” to 6’1″.