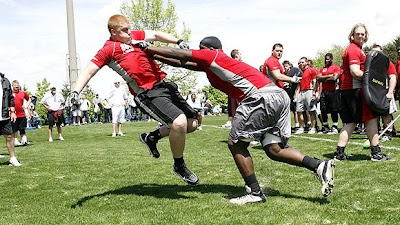 A collective sigh of relief blew through the internet when William Campbell re-committed to Michigan during the Army All-American Bowl this afternoon. He had committed to Michigan during his junior year but then decommitted in the fall of 2008 in order to take visits elsewhere. One prevailing theory for his decommitment was that he wanted to get free trips to see other parts of the country. His adventures out of the way, he picked a Michigan hat off the table instead of LSU, who had made a late push, and Miami.

Campbell is 6’5″ and 317 lbs. and a very good athlete for his size. Several schools were recruiting Campbell to play offensive line, but he will most likely be a defensive tackle for the Wolverines.

PROJECTION
Campbell’s position might depend on what defensive scheme Rich Rodriguez chooses to use in 2009. If Rodriguez chooses to use a base 3-3-5 defense, Campbell would mostly play nose tackle and split time with Mike Martin as a true freshman. If Rodriguez selects a defensive coordinator with a base 4-3 scheme, I think Campbell will start as a 3-tech defensive tackle. He and Campbell are both ideal nose tackles, but with two such talents on the defensive line – and very little depth behind them, with Renaldo Sagesse and two other incoming freshmen – Campbell is a better fit as a 3-tech than Martin would be. With Brandon Graham returning at one defensive end and two defensive tackles who could command consistent double teams, that could make for a dynamic defensive line. Barring injury, Campbell should be a three- or four-year starter.