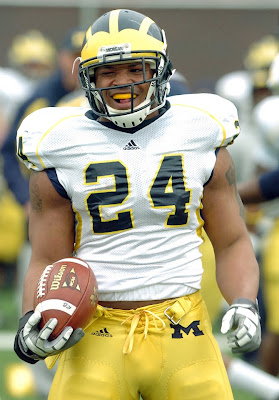 Grady has had a somewhat disappointing career so far at Michigan. He came in as a 5-star recruit following Mike Hart’s freshman season and people expected him to be Michigan’s next great back. But he hasn’t produced much and has since been passed up by less-ballyhooed (but still talented) players like Brandon Minor, Michael Cox, Carlos Brown, and Sam McGuffie.

The word from Coach Rodriguez is that Kevin Grady is playing some fullback, and it looks as though he might be a short yardage tailback. Mark Moundros is ahead of Kevin at fullback, but Kevin has a little more speed than Moundros. There are several tailbacks ahead of Kevin, but he’s the largest tailback on the roster; he won’t run past anyone, but he will run through them.