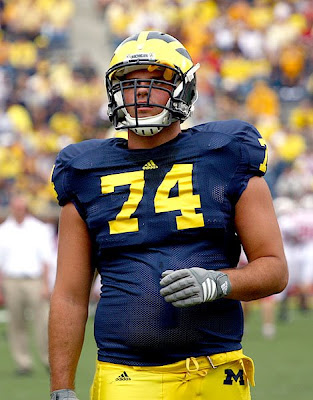 Due to many factors – the Great Migration of 2008, low recruiting numbers during the Carr era, injury to Mark Huyge, etc. – Ferrara moved from defensive tackle to offensive guard on the fly during fall camp last year. Despite garnering a fair amount of playing time as a redshirt freshman defensive tackle (12 games, 2 tackles, 1 TFL) in 2007, Ferrara agreed to the switch and pretty quickly beat out Tim McAvoy for the starting left guard position. He started five games there last year, but Steve Schilling has moved inside to guard, rendering Ferrara an afterthought as of now. He has starting experience and played pretty well in the second half of last year, but he probably won’t play much this year, and he’ll have to battle Ricky Barnum and Rocko Khoury for playing time in 2010.