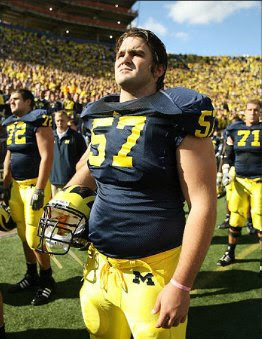 Hardcore Michigan fans are well aware of Mealer’s plight. In December 2007, he and his family were involved in a nasty automobile accident at Christmas. Mealer’s father and girlfriend were killed and his brother was seriously injured. Elliott himself injured his shoulder and spent a good portion of 2008 recovering from the crash. He instantly became a fan favorite as Michigan fans, future Michigan teammates, and Michigan coaches rallied around Elliott and his brother.

Mealer redshirted in 2008 and got a slow start on the strength and conditioning program due to his injury. His situation is similar to that of Stephen Schilling, who suffered from a shoulder injury and mononucleosis early in his career. With the offensive line pretty well solidified for 2009, Mealer is battling for a spot on the two-deep at center or guard. He may get some time in mop-up duty, but it will probably be a couple years before Mealer sees significant playing time. I think I speak for all Michigan fans when I say we’ll be rooting for him all the way.