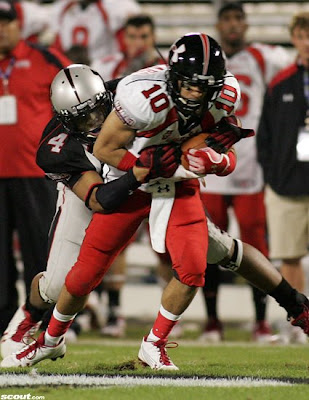 Isaiah Bell makes a tackle in the Under Armour All-American Game.

Listed at 6′ and 209 lbs. by Rivals, reports on true freshman Isaiah Bell’s size varied significantly throughout the recruiting process. His height was anywhere between 6′ and 6’2″ and he weighed from 200 lbs. up to 220 or 225. So I’m just going to assume he’s 6’1″ and 212.5 lbs. He comes to Michigan from Liberty High School in Youngstown, OH, and was the high school teammate of Fitzgerald Toussaint.

Ultimately rated as a linebacker by the scouting service, I have always thought Bell would make a better safety. He has tremendous ball skills when the football is in the air and he was also a good kick returner in high school. I’m sure his return days are over, but I’d like to see him roaming centerfield for Michigan in the next few years. If Greg Robinson and his hybrid-heavy defense stick around for a few years, Bell is probably headed for the “Spinner” position, which is a safety-linebacker combo (the same position that Steve Brown will occupy this fall). But with Brown entrenched as the starter and a couple early enrollees (Mike Jones, Brandin Hawthorne) getting reps there in the spring, I’d guess that Bell is headed for a redshirt this year. But as with the entire defensive backfield, one or two injuries could change that in a hurry.