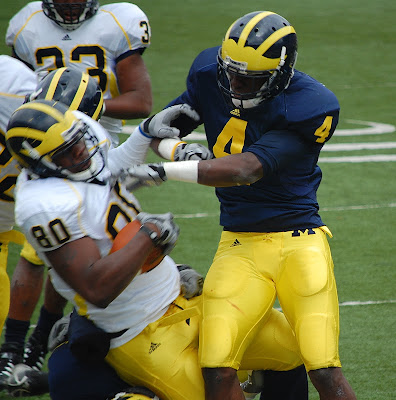 Gordon was an interesting prospect coming out of high school a year ago. He played wide receiver and wanted a shot to remain at that position, but I thought he would fit best at linebacker in college. In my opinion, he was too slow to really be a factor at wideout. After his true freshman season, he asked to move to the defensive side of the ball in an effort to help out the team. By the time spring practices came and went, Gordon was a hit amongst the coaching staff and seemed to be the leading candidate to play free safety in Michigan’s revamped 4-2-5/3-3-5 defense (I think it’s more of a 4-2-5). Spring practice reports were abuzz in regards to Gordon’s instincts, athletic ability, and ferocity. And at 6’3″, 207 lbs., he has plenty of size to bring the hammer.

While he’s literally taken zero snaps in a game situation at the college level, Gordon ranks highly because of the weaknesses we have seen at the safety position over the last couple seasons and because of the terrifying inexperience at the cornerback positions now that Troy Woolfolk will miss the season. His main competition for the starting role will likely come from sophomore Vladimir Emilien, but Emilien has lacked the speed and durability to impress practice observers in his 1.5 years on campus. Other competition at free safety will be from true freshman Carvin Johnson, sophomore Brandin Hawthorne (unlikely to ever see a snap at free safety), and true freshman Ray Vinopal (likely a redshirt candidate).

Gordon lacks the elite athleticism to play free safety in a base Cover 2 defense or even in Man Free coverages, and his presence at the position (as opposed to Spur or Bandit) indicates to me that Michigan will be mainly a Cover 3 defense this season, in which Gordon is asked to cover only the area between the hashes; however, there will surely be occasional wrinkles in the defense that will expand Gordon’s responsibilities. The free safety position should improve over the next few years with the development of Gordon, Emilien, and Johnson, but it’s imperative that Gordon stays healthy and learns quickly. Otherwise, the defense could begin to cave quickly.

Voters got this one correct: 32% chose Cameron Gordon, while the second-place finisher was Ryan Van Bergen with 22%.