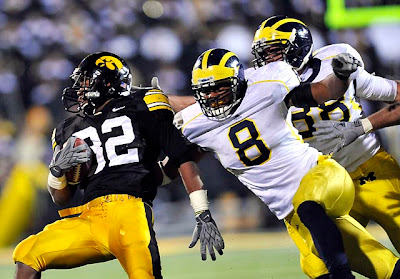 Mouton was a safety early in his career, but most educated observers assumed he would quickly outgrow the position. That happened almost immediately, as Mouton became a weakside linebacker during his true freshman season. He played sparingly as a redshirt freshman in 2007 and then exploded in 2008, when he was the second-leading tackler (76) on the team. However, he took a step backward in 2009. He’s one of those players who always seems to have a nagging injury, and a hand injury hampered him as a redshirt junior. That shouldn’t have affected his ability to diagnose plays, though, which has been a problem at times. Mouton frustrated Michigan fans repeatedly last season, along with his fellow inside linebacker Obi Ezeh.

In more positive news, old linebackers coach Jay Hopson has departed (now the Memphis Tigers defensive coordinator), perhaps after being urged by head coach Rich Rodriguez. I don’t think it’s a coincidence that the only coach to depart happened to head up the most disappointing unit in 2009. Coaching the position now is none other than defensive coordinator Greg Robinson, who made a perennial goat, safety-turned-linebacker Steve Brown, into the team’s leading tackler and a 7th round draft pick; Robinson also coached freshman DE/OLB Craig Roh into a solid true freshman season, accruing 37 tackles and 2 sacks. Michigan fans are hoping that Robinson can work his magic on the inside linebackers this year, turning an underperforming unit into the solid crew that two fifth-year seniors with 53 combined starts should provide. I’m optimistic about what he can do with the entire unit, but Mouton is especially important because the depth behind him is skimpy.

Ryan Van Bergen was the leading vote-getter for the #10 slot with 32% of the vote. Mouton was second with 23%.