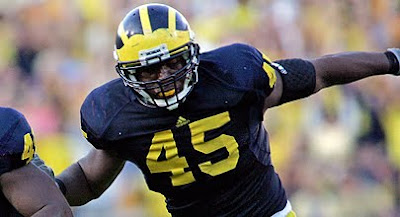 After promising redshirt freshman and sophomore seasons, Ezeh’s play fell precipitously last year. He went from 12 starts and 98 tackles in 2008 to only 9 starts and 69 tackles in 2009. One mitigating factor is that Ezeh let a back injury go undisclosed for the 2009 season. The extent to which his back injury negatively affected his play is impossible to determine, but it’s something to consider when looking at how Ezeh failed to progress as a fourth-year player. Regardless, his play recognition seems to leave something lacking. Too often running lanes opened up in front of him, and he failed to plug the hole over and over again. Instead he waits for the ball carrier to get to him and doesn’t use his hands to shed seemingly weak blocks.

Perhaps I’m overestimating Ezeh’s importance to the team yet again in 2010, but I’m hoping that the departure of linebacker coach Jay Hopson will allow Ezeh (and Jonas Mouton) to improve. Hopson seemed to be a drag on the development of the linebackers, and defensive coordinator Greg Robinson has taken over the role of coaching the position. The defense will be relatively young with a projected 4 seniors, 2 juniors, 3 sophomores, and 2 freshmen (EDIT: The Woolfolk injury changes this to 3 seniors, 2 juniors, 3 sophomores, and 3 freshmen) starting this fall. If Ezeh gives way to Kenny Demens, a redshirt sophomore, the team will get younger and more inexperienced. Furthermore, despite his shortcomings on the field last year, Ezeh seems to be a leader in the clubhouse and is well spoken when addressing the media. He reportedly took his demotion with dignity last year when former walk-on Kevin Leach started in his place. Ezeh is fighting off a push from Demens and part-time fullback Mark Moundros for the starting MLB position, but on September 4th, I hope and believe that Ezeh will be on the field once again.